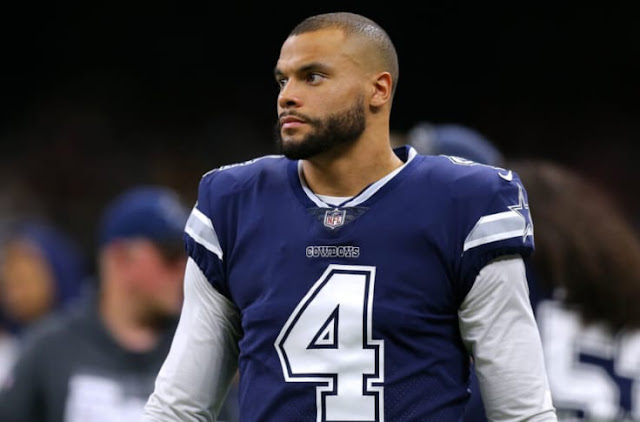 Put an asterisk by the guarantee if you must.
Dak Prescott’s inexplicable decision late in the game on top of another lackluster offensive performance reduced what should have been a swagger coming out of this game to a tentative strut.
But the bottom line is that Dallas delivered. A little more than 72 hours after head coach Mike McCarthy declared confidence that his team would come out of FedEx Field with a win, it did.
The Cowboys overpowered Washington in building a 24-point lead, then held on for dear life in Sunday’s 27-20 victory. While the outcome was closer than it had any right to be, it didn’t change the competitive landscape of the NFC East.
Dallas is now three games clear of its rivals with four games remaining in the regular season. A loss would have narrowed that gap to one game, dramatically altering the complexion of how this season plays out.
That’s why McCarthy put himself out there. That’s why he was willing to lose some credibility internally and hold himself up to public ridicule if the Cowboys lost.
The stakes were that high.
“I mean, we’re a confident bunch,” said Prescott, who enthusiastically supported his coach’s guarantee leading up to the game. “I’m confident. I know this defense is confident, this offense is confident.
“Obviously, our coach is confident. That’s why he said that.
“We just had to come out here and go do that, be accountable to our words.”
The guarantee was uttered three days earlier, casually tucked into an answer about the Cowboys’ offensive struggles.
“We’re going to win this game,” McCarthy told reporters. “I’m confident in that.”
This sparked the back and forth you’d expect. Dallas players expressed appreciation for their coach’s public declaration. Washington coach Ron Rivera expressed bemusement and went as far as to say that what his counterpart did was a mistake.
It was no mistake. The Cowboys came out with a ferocity that has rarely been seen since an early six-game winning streak, hanging 18 points on Washington in the first quarter and extending that lead to 24-0 before the half was done.
“What do you want him to say, we’re going to lose?” receiver CeeDee Lamb asked. “It’s all in the game.
“It’s a division game, it’s December, it’s very clutch. For us, to come out and perform the way we did, ultimately get the ‘dub’ and actually see them in two weeks at home, it’s huge.
“We have to ride this momentum. We have to ride it the next four games we have, keep pushing and get better.”
Supreme confidence. Defensive end Randy Gregory said that was the message being preached at The Star. He maintains that confidence from the head coach trickles down.
Gregory’s first quarter interception that led to the Cowboys’ only offensive touchdown and his fourth quarter sack/strip/fumble that sealed the victory were big parts of this trickle-down performance.
Did McCarthy’s comments create pressure for his players? Pressure would be getting past the divisional round, something this franchise hasn’t done in 25 years.
Defensive end Dorance Armstrong, who returned a fumble 37 yards for a touchdown after a Micah Parsons strip sack, said McCarthy’s comments gave the team confidence. The players wanted to show they had his back.
“Really, the focus from my perspective was obviously win the game,” McCarthy said when asked how the players responded to his challenge. “These division games, December football ...
“I was very pleased to come in here and get this division win.”
That doesn’t mean there weren’t some tense moments. Washington narrowed the deficit to 13 points going into the final five minutes. Two plays later, on second-and-six, Prescott tried to force the ball to tight end Dalton Schultz.
Linebacker Cole Holcomb picked it off and returned it 26 yards for a pick-six, allowing Washington to pull within seven points with 4:13 remaining. The Dallas defense was asked to rise to the occasion.
Again.
“Even when I throw that terrible interception and they run it back, there is no flinch in this team and what we’re going to do to come out with a win,” Prescott said. “I think it just shows our resiliency and who we are in the midst of a tough division game where we didn’t necessarily put the nail in the coffin when we had a chance.”
That nail should be driven in the division coffin soon. If the Cowboys win next week against the New York Giants, the franchise can clinch the title the night after Christmas when it faces Washington in the rematch.
“Some interesting things can happen,’’ said Rivera, whose team faces Philadelphia next week. “Somebody else can lose a game or two as well. And who knows?
“The Washington football team versus Dallas should be a big game like it was today. We just gotta play better.”
Funny. The Cowboys came away from this game saying the same.
At least they made good on the guarantee.
Posted by High Plains Pundit on December 13, 2021

Email ThisBlogThis!Share to TwitterShare to FacebookShare to Pinterest
Tags: Sports