Biden to offer warning to Putin 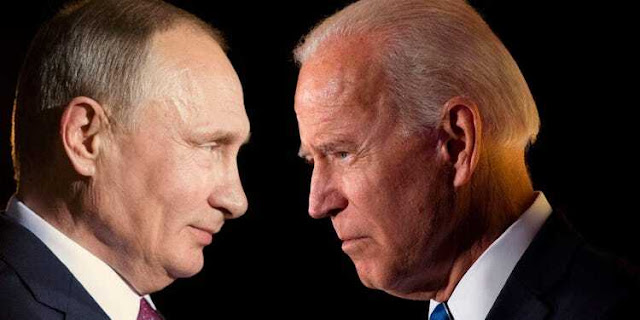 President Biden will warn Russian President Vladimir Putin on a high-stakes video call Tuesday that the United States is prepared to impose harsh economic consequences on Moscow if it goes through with a military invasion of Ukraine.
Russia has amassed tens of thousands of troops on the border with its neighboring country, putting Washington and Europe on edge. Tuesday’s call represents a significant foreign policy moment for Biden, who saw his standing on the world stage take a hit over America’s retreat from Afghanistan in August.
Biden’s aim during Tuesday’s call, perhaps his most consequential moment with Putin so far in his presidency, is to stress to the Russian leader that he would pay a serious price for an invasion but that the United States prefers a diplomatic solution to the crisis, according to administration officials.
“He will make clear that there will be very real costs should Russia choose to proceed, but he will also make clear that there is an effective way forward with respect to diplomacy,” a senior Biden administration official told reporters.
Biden has seen his own political standing and approval ratings fall over the past several months, a decline that really picked up with the U.S. withdrawal from Afghanistan.
The rushed withdrawal, during which the Taliban took over Afghanistan more quickly than the administration had expected, was a hit to the Biden administration’s branding, and at the time raised concerns that it would trigger challenges by Putin and other adversaries.
Republicans in Congress have ripped Biden over the handling of Afghanistan while also arguing he has been too soft with Putin, previewing themes that are likely to be covered in the 2022 midterm and 2024 presidential elections.
Russia is demanding a legally binding guarantee that NATO would not expand east, to include Ukraine, which is not currently a member of the alliance. The administration official said that Biden would support conversations between Russia and NATO on issues of disagreement but rejected talk of “red lines.”
Rep. Michael McCaul (Texas), the top Republican on the House Foreign Affairs Committee, pressed Biden not to offer any concessions to Putin.
“This would not only fail to deescalate tensions, it would also embolden Vladimir Putin and his fellow autocrats by demonstrating the United States will surrender in the face of saber-rattling,” McCaul said.
White House press secretary Jen Psaki declined to say how specific Biden would get in his warning to the Russian president on the Tuesday call, but she said he “is not going to hold back in conveying his concern and also conveying our conversations and our preparations should they be warranted.”
The senior administration official suggested that a Russian invasion would be inevitably followed by an increased U.S. military presence on NATO’s eastern flank, but at the same time appeared to downplay the likelihood of direct U.S. involvement in a conflict between Russia and Ukraine.
Asked about possible U.S. military intervention or a pending weapons package to Ukraine should Russia carry out an offensive, Pentagon press secretary John Kirby declined to comment, citing the upcoming phone call between Biden and Putin.
“I think we need to let that conversation happen,” Kirby said.
Evelyn Farkas, who served as deputy assistant secretary of Defense for Russia, Ukraine, and Eurasia under former President Obama, said Biden needs to make it clear to Putin that Russia will face a punishment for a second invasion of Ukraine following its 2014 incursion into the Crimean Peninsula.
“The biggest lesson they can learn, and it seems they have learned this based on some of the actions and things they have telegraphed publicly, is they need to tell the Russians ahead of time what the consequences for any military action will be,” Farkas said.
“You want to make it costly. The Russians can win, but at what cost?” Farkas said.
Officials say that they are weighing a range of steps, including punishing economic sanctions and additional military assistance to Ukraine, in coordination with European allies, should Putin move forward with a military invasion, though they declined to offer specifics.
Experts said that an option likely on the table is barring Russia from the SWIFT banking system, though such a step could hurt other countries that rely on Russia for energy and use the banking system to pay for it.
Biden officials stressed that the administration is closely coordinating with European allies on the options. Biden held calls with European leaders Monday afternoon in preparation for the secure video call with Putin.
“We believe that we have a path forward that would involve substantial economic countermeasures by both the Europeans and the United States that would impose significant and severe economic harm on the Russian economy should they choose to proceed,” the senior administration official said.
It’s an open question whether Biden, who led the Obama administration’s response to the Crimea invasion in 2014, will be successful in convincing Putin to pull back.
Russian government hackers have appeared undeterred from operations against U.S. entities despite Biden’s efforts since taking office to impose costs on Russia in the form of economic sanctions. Biden held a summit with Putin over the summer partially aimed at curbing Russia’s aggression in cyberspace.
Angela Stent, director of Georgetown University’s Center for Eurasian, Russian and East European Studies, suggested it was more likely that Russia would pursue a limited incursion of Ukraine rather than a major war to seize Kyiv if Putin decides to invade, noting the unpopularity of the Ukraine conflict among Russians.
Putin is facing lower-than-normal approval ratings, and Stent surmised that he ordered the military buildup to extract concessions on other issues.
“In Russia, this conflict is not popular,” Stent said. “People don’t want to see Russian soldiers coming back in body bags.”
Posted by High Plains Pundit on December 07, 2021
Tags: World