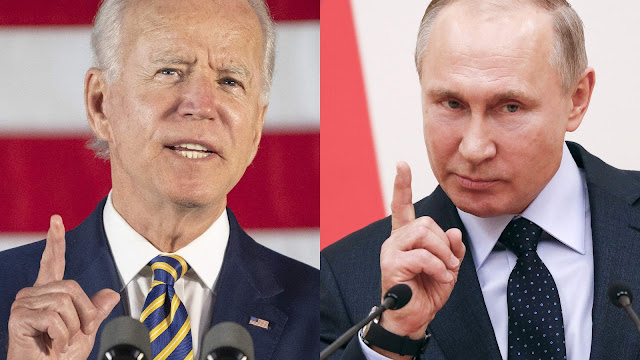 President Biden in his second call with Russian President Vladimir Putin this month warned that the U.S. will respond "decisively" if Moscow invades Ukraine.
Biden, who spoke by phone for nearly an hour with Putin, urged the Russian leader to de-escalate tensions with Ukraine, according to a readout from press secretary Jen Psaki.
Biden “made clear that the United States and its allies and partners will respond decisively if Russia further invades Ukraine,” the White House spokeswoman said, referring to Russia's invasion of the Crimean Peninsula in 2014.
The U.S. president “reiterated that substantive progress in these dialogues can occur only in an environment of de-escalation rather than escalation,” Psaki added.
A senior administration official told reporters that the primary purpose of the 50-minute call was to “set the tone and tenor” for upcoming security negations in Geneva, Switzerland.
Officials from the U.S. and Russia are slated to meet on Jan. 10 to discuss Moscow’s stepped-up security demands. That same week, Russian officials will also meet with NATO and the Organization for Security and Co-operation in Europe’s Permanent Council.
The Kremlin released its demands earlier this month, as Russia’s buildup of troops near the Ukrainian border sparked fears that Moscow may be planning to invade Ukraine again.
Moscow has repeatedly denied intentions to invade Ukraine, and among other things is demanding that NATO not expand eastward and also roll back military deployments.
Russia is also calling for all sides to agree not to deploy land-based intermediate- and short-range missiles in areas that allow them to reach other parties.
During their previous call on Dec. 7, Biden also warned Putin of high economic consequences if Russia were to invade Ukraine.
Thursday’s call began at 3:35 p.m. ET and ended at 4:25 p.m. The tone between the two leaders was “serious and substantive,” the administration official said, and they agreed to the sequence of the upcoming talks.
The two leaders also acknowledged that there would be areas where meaningful progress could be made, and that agreeing on other areas may be impossible.
“They both discuss the importance of pragmatic, results-oriented diplomacy, and I think President Biden very much saw this call as seeking to set the conditions for that,” the official said.
Moving forward, the U.S. will take the next week to continue its “intensive period” of consultations with allies and the Ukrainian government, the official said, which would include briefing allies on the call.
Posted by High Plains Pundit on December 30, 2021
Email ThisBlogThis!Share to TwitterShare to FacebookShare to Pinterest
Labels: World