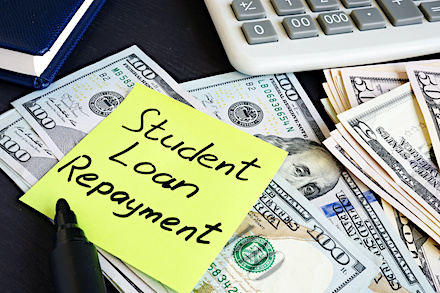 President Biden on Wednesday extended the pandemic moratorium on federal student loan payments and interest accrual through May 1 amid surging cases of COVID-19.
The president announced the extension in a Wednesday statement touting the strength of the economy during his first year in office, but acknowledging the new threat posed by the omicron variant.
“Now, while our jobs recovery is one of the strongest ever,” Biden said, “we know that millions of student loan borrowers are still coping with the impacts of the pandemic and need some more time before resuming payments.”
“Given these considerations, today my administration is extending the pause on federal student loan repayments for an additional 90 days — through May 1, 2022 — as we manage the ongoing pandemic and further strengthen our economic recovery.”
Those with student loans owed to the federal government have not been required to make payments on their debt since former President Trump initially issued the moratorium in March 2020. Trump's order also froze the accrual of interest on federal student loans, effectively freezing $1.6 trillion in debt owed by more than 40 million Americans.
The moratorium was set to lapse on Jan. 31 per an extension signed by Biden in August, and the White House all but ruled out another extension earlier this month. But the president had faced growing pressure to extend the federal student loan freeze as COVID-19 cases began spiking earlier this month.
Omicron’s arrival has sparked a wave of event cancellations and postponements, scrapped travel plans, temporary business closures in hard-hit areas, and fears of an economic slowdown. Omicron appears to spread far faster than previous variants, though health experts say those who’ve been fully vaccinated with boosters are still well protected from severe disease.
Biden’s decision will give roughly millions Americans more breathing room as the economy faces another pandemic wave.
“We know that, as was noted in the president’s statement, that a number of people, millions of people across the country are still struggling with the ongoing threat of the pandemic. Many of them are student loan borrowers. This is something the president thought a lot about over the last several days in coordination, and of course conjunction and discussion with the vice president, and it led to the decision to extend until May," White House press secretary Jen Psaki told reporters during a Wednesday briefing.
Progressive lawmakers who urged Biden to extend the moratorium offered immediate praise, but with another nudge toward unilaterally forgiving a significant chunk of the federal student loan balance sheet.
“The pause on federal student loan payments, interest, and collections has improved borrowers’ economic security, allowing them to invest in their families, save for emergencies, and pay down other debt. Extending the pause will help millions of Americans make ends meet, especially as we overcome the Omicron variant,” said Senate Majority Leader Charles Schumer (D-N.Y.), Sen. Elizabeth Warren (D-Mass.), and Rep. Ayanna Pressley (D-Mass.) in a Wednesday statement.
“We continue to call on President Biden to take executive action to cancel $50,000 in student debt, which will help close the racial wealth gap for borrowers and accelerate our economic recovery.”
While Biden said he would sign a bill forgiving up to $10,000 in federal student debt per borrower, he has ruled out going as high as $50,000. The administration has also expressed doubts about Biden’s authority to unilaterally cancel debt, and has refused to release an internal legal analysis requested by the president.
Posted by High Plains Pundit on December 22, 2021