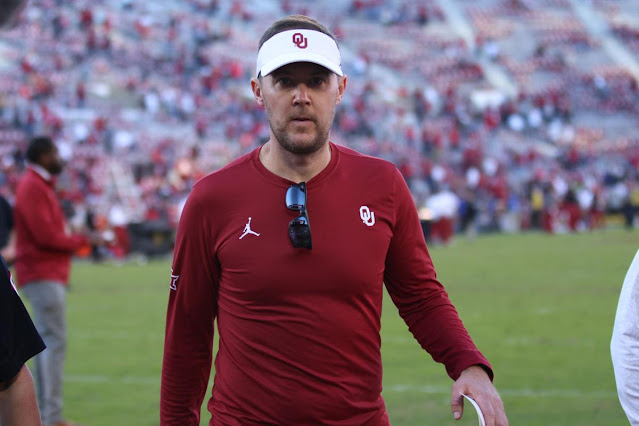 USC is set to hire Oklahoma coach Lincoln Riley in its search to replace Clay Helton, sources confirmed. Riley, 38, has led the Sooners for the past five seasons after taking over for legendary coach Bob Stoops.
Oklahoma went 55-10 under Riley with four Big 12 titles and three College Football Playoff appearances during his tenure. The Sooners posted a 10-2 record in 2021 but missed out on the Big 12 Championship Game after losing Bedlam to Oklahoma State on Saturday.
Riley shot down rumors tying him to the LSU opening after Saturday's loss, but he was not specifically asked about the the USC vacancy.
If he does make the jump to the Pac-12, it'll be in a recruiting hotbed of players who will likely be extremely attracted to Riley's wide open, up-tempo offense. Riley has produced two Heisman Trophy winning quarterbacks (Baker Mayfield, Kyler Murray) and sent another to New York as a Heisman Trophy finalist (Jalen Hurts).
USC fired Helton two games into the 2021. Helton went 46-24 with the Trojans, including a Rose Bowl victory over Penn State following the 2016 season.
Posted by High Plains Pundit on November 28, 2021
Email ThisBlogThis!Share to TwitterShare to FacebookShare to Pinterest
Tags: Sports