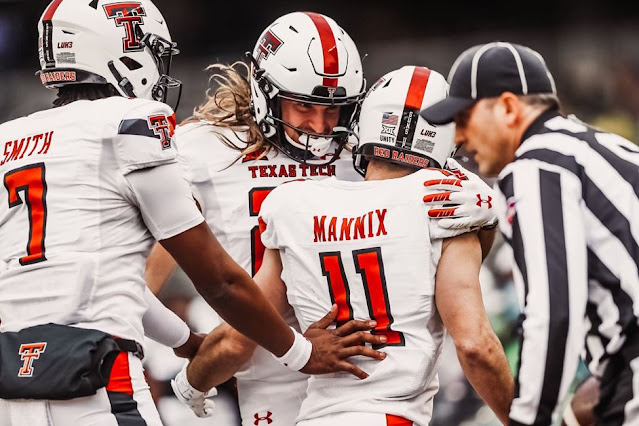 The Texas Tech football team fell just short of an upset of a top-10 team in Waco on Saturday falling to Baylor 27-24. It was a game the Red Raiders never led or even managed to get tied after Baylor scored on the first possession of the game.
Yet, credit Sonny Cumbie’s team for its fight as Tech was able to have a shot to send the game to overtime with a 53-yard field goal attempt as time expired.  But for the first time this season, kicker Jonathan Garibay couldn’t connect on a kick and the upset bid fell short.  Here are some quick thoughts on what transpired in Texas Tech’s regular-season finale.
3rd down told the story of this game
Texas Tech has to look no further than what happened on 3rd down to see why this game ended up as a loss.  On both sides of the football, Baylor was far superior on the game’s most critical down and that proved to be the difference.
The Bears converted on nine of their 19 third-down opportunities.  That’s 47.3%.  Meanwhile, Tech was able to convert on just three of their nine third-down chances.
What’s more, Baylor was also 3-4 on fourth down.  That’s why the Bears ended the game with a 37:26 to 22:34 edge in time of possession.
That edge seemed to grind down the Red Raider defense as the second half wore on and though the Red Raiders were able to make a couple of defensive stands late in the game, they continually let Baylor extend drives and drain precious minutes off the clock before getting the ball back.  It’s fair to wonder what would have happened had Tech managed to get just one or two more third-down stops in this one.
Smith outplayed by Shapen
Because of an injury to Baylor starting QB Gerry Bohanon, the Bears had to turn to freshman Blake Shapen to make his first career start.  Unfortunately, the Shreveport, LA native was up to the task.  In fact, he outplayed Texas Tech redshirt freshman QB Donovan Smith, who was making his third career start.
The two had similar numbers.  Smith passed for 262 yards and a pair of scores while Shapen went for 254 yards through the air and two TDs of his own.  But don’t forget that Shapen also ran for 24 important yards while Smith was a -4 in the rushing department.
Smith was essentially a non-factor for the first three quarters of the game on Saturday.  And don’t forget that 75 of his passing yards came on the screen pass touchdown to tight end Travis Koontz and 38 more came on the pass to wide-open McLane Mannix, who also found the endzone.
But outside of those two plays, Smith was just 13-21 passing for 151 yards.  That’s an average of just 7.1 yards per attempt.  Of course, that’s not good enough to knock off a top-10 opponent as your QB has to be steady and productive throughout the game to accomplish such a feat.
Steady and consistent was what Shapen was all afternoon.  Yes, he got away with a pass that should have been intercepted by Rayshad Williams but for the most part, he was the more composed and more productive QB of the two on Saturday and that was a bit surprising given that this was his first collegiate start.
Ground game did Tech no favors
In all, the Texas Tech rushing numbers from this game don’t look too paltry.  Rushing for 124 yards and a TD on 28 attempts, Tech averaged 4.4 yards per run.
However, the reality is that 54 of those yards came via jet sweeps by receivers Mannix, Erik Ezukanma, and Kaylor Geiger.  That means that the Red Raider running backs had a rather forgettable afternoon.
Between them, SaRodorick Thompson, Tahj Brooks, and Xavier White mustered just 74 yards on 19 rushes.  That’s an average of only 3.8 yards per rush and that isn’t what this offense needed on a day when Donovan Smith was not able to move the offense through the air for most of the game.
Also, Thompson had a costly fumble on Tech’s first play of the game, a turnover that would lead to three important points for Baylor and which would end his afternoon as he spent the rest of the game on the sidelines. It was the second-straight game in which Tech’s ground game failed to help carry the offense after Tech ran for only 25 yards a week ago against Oklahoma State.
Defense not forcing turnovers
It’s now been two games since Tech forced a turnover and that’s not how you upset top-10 teams, which Tech wanted to do in each of the past two outings.  That’s disappointing for a Red Raider defense that was supposed to be built on taking the ball away.
Tech finishes the regular season with just 12 turnovers gained.  That’s good for just 103rd in the nation.  And when you consider that four of those came against Houston in the opener, it becomes clear that this defense wasn’t able to generate takeaways nearly enough.
Tech had several opportunities to create turnovers on Saturday with Damarcus Fields and Rayshad Williams both dropping potential interceptions.  The Williams drop, which was initially ruled an INT but then overturned, was truly a heart-breaker given that, had he held onto the football, he could have scored a TD that would have possibly changed the outcome of the game.
The Red Raider defense has been good enough to win each of the past two games but against defenses as stout as Oklahoma State and Baylor, Tech’s offense needed some help from the other side of the ball in the form of short fields.
That didn’t happen and Tech ends the regular season having created just two takeaways in the final four games.  That certainly didn’t help as Tech went just 1-3 down the stretch against the elite teams in the conference.
Sports