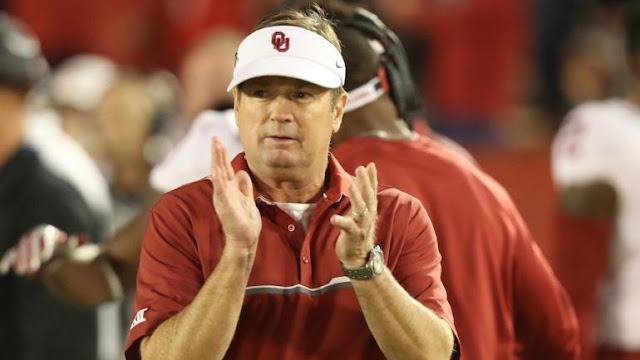 Oklahoma coach Lincoln Riley is on his way to sunny Southern California to take over at USC, which leaves an extremely attractive coaching vacancy with the Sooners. A familiar name will take over the program before a permanent coach can be named as Bob Stoops will reportedly serve as Oklahoma's interim coach for its bowl game this postseason, according to multiple reports.
Oklahoma's regular season came to an end on Saturday with a 37-33 loss to rival Oklahoma State in the Bedlam rivalry. The Sooners lost Riley less than 24 hours later, though his move to the Trojans is not yet official.
Stoops went 190-49 across 18 seasons in Norman, Oklahoma, winning 10 Big 12 championships and claiming the 2000 national title with a win over Florida State in the 2001 Orange Bowl. He was inducted into the College Football Hall of Fame in January.
Stoops retired on June 7, 2017, and handed the keys to Riley, who led the program to three College Football Playoff appearances before bolting to Los Angeles. Stoops has been working as a college football analyst for Fox since his retirement.
This is not the first time that a coaching legend has come out of retirement to coach his former team on an interim basis. Wisconsin's Barry Alvarez came in to coach the Rose Bowl in a losing effort after Bret Bielema left to lead Arkansas after the 2012 season. Alvarez then won the Outback Bowl two years later after Gary Andersen departed Wisconsin for Oregon State.
Sports