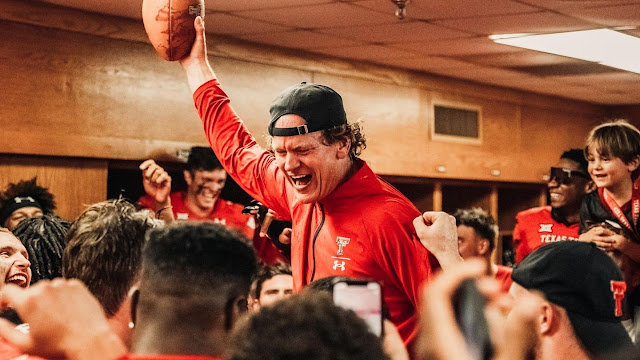 Wednesday, new Texas Tech football head coach Joey McGuire announced via a Twitter video that he has decided to retain offensive coordinator Sonny Cumbie.  A more perfect move could not have been made for this program.
If, as he said in his introductory press conference, McGuire wants his program to embody the toughness of West Texas, then making Cumbie an integral part of his initial coaching staff is a no-brainer move.  After all, no one understands West Texas and Texas Tech better than Cumbie.
By now, almost every Red Raider knows Cumbie’s story.  A former walk-on who rose to the job of starting quarterback by beating out a 5-star JUCO recruit (Robert Johnson) for the job, Cumbie led Tech to a win over Aaron Rogers and No. 4 Cal in the 2004 Holiday Bowl to cap off his unlikely career as a Big 12 starting QB.
He then had a stint in the Arena League before beginning a coaching career that has seen him rise from a graduate assistant at Texas Tech to an offensive coordinator for now two different Big 12 teams.
Along the way, he’s had three offenses (2014, 2015, 2017) finish the year in the top 10 nationally in total yards.
This year, he’s got the Red Raiders putting up over 411 yards per game despite having to play three different starting quarterbacks, including a redshirt freshman in Donovan Smith.  But Cumbie’s value can’t be summed up with mere stats.
Rather, he’s shown during his time as interim head coach that he’s exactly the type of leader that would be a perfect fit with McGuire.  McGuire has repeatedly said that he wants coaches who are going to pour into the players on his roster and no one has done that more this season than Cumbie, who was thrust into a tough situation following the midseason firing of Matt Wells in October.
But Cumbie has been able to keep this year’s Red Raider team from throwing in the towel on the season.  And not only has his team played hard for him, but he was also able to lead Tech to a dramatic 41-38 win over Iowa State to secure bowl eligibility.
It was in that game that Cumbie’s most brilliant idea as a Red Raider was born as the West Texas native tapped into something synonymous with the region and used it to motivate his team.  Using the iconic oilfield pumpjacks that dot the area’s rugged landscape as a metaphor, he brought the now-famous “Pumpjack Mentality” to the program.
That mantra has caught on with the Red Raiders like wildfire and it’s proof of how great of a motivator Cumbie is.  And that had to impress McGuire who is all about motivation and interpersonal connections.
What’s more, McGuire may see some of himself in Cumbie.  After all, McGuire was an integrap part of the Baylor staff during the transition from the Matt Rhule era to the Dave Aranda era and his presence helped keep the Bear’s roster largely intact as the new coaching staff took over.  Now, he is likely going to ask Cumbie to do the same in Lubbock.  And that’s something Cumbie’s personality is especially suited for.
Still, in a way, Cumbie will have to prove himself all over again being as he will be working with a new head coach.  And he will start with a less than ideal situation at QB as he will enter next season not knowing who his starter will be or even which QBs will still be on his roster.
Some say that Cumbie has struggled to develop quarterbacks since Trevone Boykin departed TCU after the 2015 season.  Of course, it’s been almost that long since Tech had a star QB and for Cumbie and the Red Raiders to get back to being a relevant participant in the Big 12 title race, Cumbie will have to find the program’s next great passer.
But no one that the program could have asked to help rally this roster and this fan base around the new head coach would be more effective than Cumbie.  Remember, he is so popular in Lubbock that he was the guy Matt Wells was banking on to bring goodwill to his coaching staff when Wells’ popularity was at one of its lowest points last offseason
That tactic only subdued the fans for a few weeks as ultimately, Wells could not get out of his own way and lost his job.  But as soon as Cumbie was elevated to the role of interim head coach, the fan base began to unite (due in large part to the fact that the unpopular Wells was no longer part of the program) and through this entire transition period, Cumbie has been the steadying hand at the wheel.
Now, he’s going to be part of this program moving forward and that’s great news for Red Raider fans.  Because no one McGuire could have hired as offensive coordinator is as similar to the new head coach as is Cumbie, who is the embodiment of West Texas Tough and who will be a perfect fit on this new coaching staff.
Sports