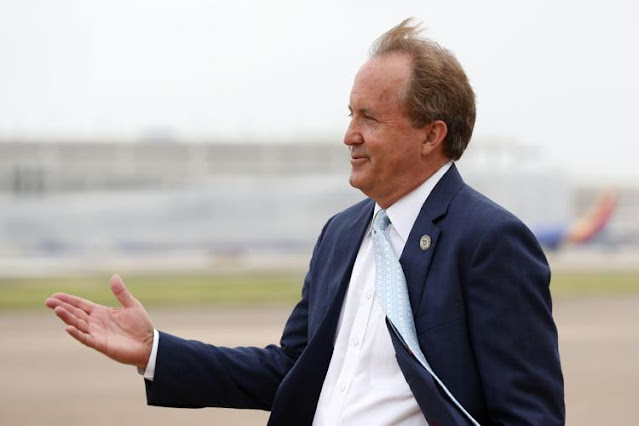 By Bethany Blankley
Texas was the first state to sue the Biden administration in January, and it isn’t stopping, Texas Attorney General Ken Paxton said at a Tuesday news conference in the border town of Del Rio.
Paxton was joined by Uvalde Mayor Don McLaughlin, Val Verde County Sheriff Joe Martinez, and Texas Department of Public Safety media liaison Lt. Chris Olivarez.
Paxton said it was incredible to learn how Border Patrol agents were doing their jobs with limited resources, and lauded their efforts. Paxton met with members of Border Patrol, state and local law enforcement, ranchers and business owners during a two-day trip to Del Rio and Brackettville.
What he learned, he said, “was consistent across the board. It doesn’t matter what party they represent. We’re all united and hoping and praying that our government can stem the tide and stop doing what they’re doing, which is allowing mass illegal immigration.”
Of roughly a dozen legal actions Paxton’s office has taken against the Biden administration, including those filed with other states, at least six lawsuits relate to illegal immigration.
At this point, Paxton said his office was focused on enforcing the rulings of the courts because the Biden administration was ignoring federal law and court orders.
“We’re going to push toward getting some accountability,” he said. “And you’re going to see other lawsuits coming from us to try to force the administration to do the right thing, which is merely protect our citizens, follow federal law.”
He added that his office will not stop fighting the Biden administration because illegal immigration impacts lives not just in Texas but all over the nation. As time goes on, and as you see the fentanyl trade growing, and as you see human trafficking growing, it’s going to affect the entire nation with very bad consequences.”
McLaughlin, who has been a vocal critic of Gov. Greg Abbott, arguing he has not done enough to secure the Texas border, said that the kind of crime Uvalde is dealing with is different than what the world witnessed several weeks ago in Del Rio. Uvalde is home to about 15,000 residents and is located 70 miles from the border
Instead of having more than 15,000 people illegally congregate under a bridge as they did in Del Rio, Uvalde has been dealing with dangerous car chases, foot traffic and crime.
“In the summer, we were having four to five high-speed chases a day,” he said. “Anywhere from 100 to 135 miles an hour.
“Today, we’re having three to four bailouts every day where we spend most of our time chasing immigrants through our town,” he said.
Bailouts occur after law enforcement officers pursue a speeding driver who ultimately stops and those inside bail out of the car, run into the streets, in neighborhoods, near schools, onto private property, into the brush and evade capture.
“Our school district has had to hire officers to patrol our schools because they bailout by our schools and we have to keep those kids safe,” he added. “So this is something we’re having to deal with on a daily basis.”
Law enforcement is also apprehending between 10 and 100 people a day at a train stop in Uvalde, mostly individual men who stow away in grain bins or train cars.
“Some of those people on those trains are bad people,” he added. “They’re murderers, pedophiles, they’re rapists. This goes on every day, seven days a week in Uvalde.”
Val Verde County Sheriff Joe Martinez said, “I hope that what we experienced here, nobody else does. But I can guarantee you that it's coming.”
Olivarez said DPS has helped arrest 1,200 illegal immigrants since March when Abbott first launched Operation Lone Star.
Paxton’s trip came roughly a week after Abbott hosted Republican governors in Mission, Texas, citing ways in which the governors had been working together to strengthen border security efforts in response to the Biden administration’s open border policies.
Texas