Another game, same story for Matt Wells and the Red Raiders 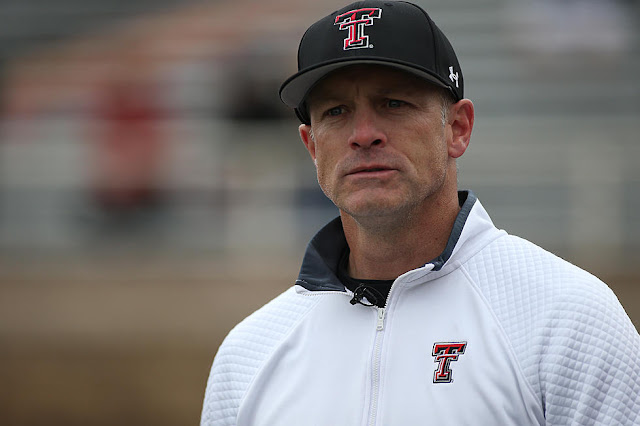 Texas Tech entered its home matchup against Kansas State just one win away from becoming bowl eligible. With a brutal back half of a schedule that includes Oklahoma and Oklahoma State, this felt like the game the Red Raiders desperately needed to win. From the jump, it looked like the Red Raiders came to play. Or so it seemed.
Only three and a half minutes into the game, Texas Tech had already jumped out to a 14-0 lead. But what felt like a perfectly scripted start suddenly turned into a disaster. The Red Raiders suffered a safety only two minutes into the third quarter, the play that would change the entire trajectory of the game. Texas Tech would go on to put together a second half where it was outscored 15-0, gave up 220 yards of offense and committed a defensive personal foul on 3rd and 34.
The disastrous second half would cause Texas Tech to lose its third game of the season. While the Red Raiders’ previous two losses were by a 26 point average margin of defeat, this 25-24 loss felt especially deflating. The collapse felt like a nightmare, as countless mistakes piled onto each other. But it’s the kind of nightmare Texas Tech fans have become far too accustomed to in Matt Wells’ tenure as head coach.
In games determined by seven or fewer points, the Red Raiders are 6-7 under Wells. Three of those six wins were against Kansas, Houston Baptist and Stephen F. Austin. There was the infamous Texas meltdown, the pitch to nobody against Kansas and now the free first down to the Wildcats’ offense on 3rd down and 34.
The most noteworthy member of the Kansas State offense is running back Deuce Vaughn. With Texas Tech’s defensive struggles in stopping the run, it would’ve made sense for him to be the point of concern on the Wildcats’ offense. Vaughn got smothered against Texas Tech, running the ball 15 times for only 52 yards. Kansas State as a team rushed for only 81 yards during the entire game, but even that didn’t cost them a win.
Texas Tech did a lot of things better than Kansas State. The Wildcats had 93 yards in penalties and turned the ball over multiple times, but the Red Raiders couldn’t capitalize. Kansas State stayed on the field with ease, converting on five of its 12 third-down and both of its fourth-down attempts. Texas Tech couldn’t stay on the field, going just two for 10 on third-down.
The Texas Tech offense completely stalled in the second half. In 24 second-half plays, the team gained only 86 yards. In four second half drives, the Red Raiders turned the ball over on downs twice, punted it once and got tackled in their own endzone. Not only did the Red Raiders’ offense not score in the second half, it gave its opponent points.
There are a number of daunting numbers from this game, but the loss itself is the most despairing part. The Red Raiders haven’t beaten Kansas State since 2015. Texas Tech hasn’t won back-to-back Big 12 games since Week 7 of the 2018 season. The Red Raiders haven’t had a win streak longer than three games since they won seven in a row to start the 2013 season.
In front of a parent’s weekend crowd with the chance to be bowl eligible in October for the first time in eight years, Texas Tech couldn’t pull out a victory. The Wildcats had an 8% chance of winning this game at halftime, according to ESPN’s win probability estimator. Texas Tech didn’t just get defeated; it somehow found a way to lose.
It’s a trend that would be understandable if it made Texas Tech fans apathetic, but it’s seemed to do just the opposite. For many, it feels like yesterday when Micheal Crabtree, Graham Harrell and Baron Batch were leading this team to its best season in three decades. The Air Raid offense is still fresh on the minds as fans watch a team that has scored 15 of its last 16 touchdowns on the ground. With memories fresh on the mind, mediocrity is brewing frustration towards Wells.
Texas Tech fans are calling and ready for a change. A record of 13-17 for Wells is failing to excite a city hungry for good football. After its most recent staggering loss, Texas Tech will now have to find success in a schedule that has Oklahoma, Iowa State, Oklahoma State and Baylor remaining on it.
The outlook is grim, but Wells will have to find a way to rally his team through the difficulty to have any chance at retention.
Sports