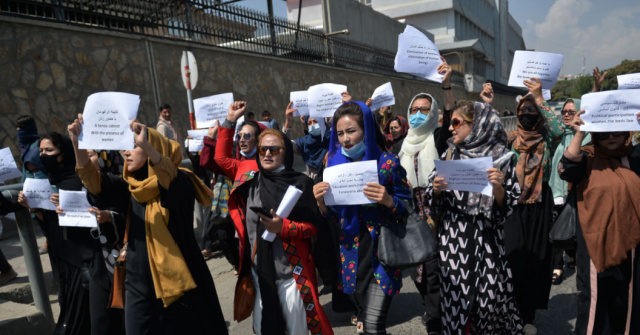 Special forces for the Taliban abruptly ended a demonstration for women’s rights in Afghanistan’s capital on Saturday, The Associated Press reported, prompting further anxiety about the insurgent group's rule in the country.
The women peacefully marched to the Ministry of Defense in Kabul, where they placed a wreath to commemorate the Afghan soldiers who died in combat while fighting Taliban members, the news service noted.
Members of the Taliban reportedly started to address demonstrators as the protesters, who were moving on to the presidential palace, started to get louder. When the women explained that they were protesting for their rights, one of the Taliban members told them that the insurgent group would give them their rights, according to the AP.
However, the situation soon turned chaotic. Protesters started to run away upon reaching the palace as Taliban members started to shoot into the air and run toward the demonstrators, abruptly ending the protest.
The Taliban also fired tear gas, one witness told the AP.
Afghanistan changed rapidly last month as the insurgent group took control of provinces and major cities, culminating in the capture of Kabul in mid-August as Taliban members entered the presidential palace after President Ashraf Ghani fled the country.
The Taliban have claimed that they will recognize the rights of women within the Islamic framework and will not go after old enemies. However, recent events, including the abrupt end to the women’s march, may indicate otherwise.
Afghan women who spoke to the media last month expressed fear and apprehension over what Taliban rule will look like in the country. They warned that the international community should not trust previous statements made by the Taliban.
“I want to see if women are able to sing on stage without a scarf. I want to know if a man or woman can stand next to each other and sing on TV. I want to see women play at the soccer stadium. That is the level of freedom I want in that country if I want to live under their flag,” one Afghan woman said.
World