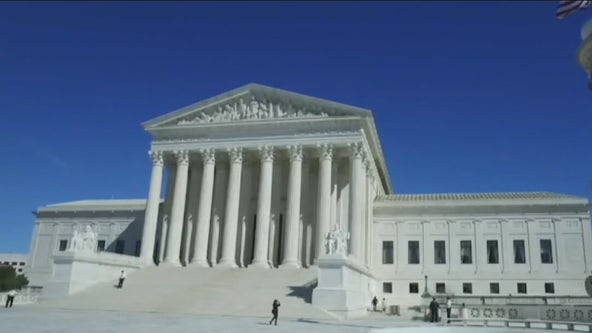 A sharply divided Supreme Court on Wednesday night refused to block a Texas law that bans most abortions, leaving the country’s most restrictive abortion measure intact.
Just before midnight, the court denied an emergency request from abortion providers to block the law, issuing a 5-4 ruling with Chief Justice John Roberts joining the court's three liberal justices in dissent.
The majority, citing procedural complexities, said abortion providers had failed to make a persuasive case for the court to step in, but added that the challengers had raised “serious questions” about the law’s constitutionality.
Justice Sonia Sotomayor, in a fiery dissent that was joined by her two fellow liberal justices, called the ruling “stunning.”
“Presented with an application to enjoin a flagrantly unconstitutional law engineered to prohibit women from exercising their constitutional rights and evade judicial scrutiny, a majority of Justices have opted to bury their heads in the sand,” Sotomayor wrote.
The Texas bill at issue was signed into law in May by Gov. Greg Abbott (R) and took effect Wednesday. It prohibits abortions after the presence of a fetal heartbeat is detected, which can occur as early as six weeks after a woman becomes pregnant, and only makes exceptions for medical emergencies.
The impact of the law was already felt in Texas by late Wednesday, according to abortion providers, who said they were complying with the new state law by not offering abortions following the detection of fetal cardiac activity. The groups estimate that about 85 to 90 percent of women who get an abortion in Texas are at least six weeks into their pregnancy.
In July, a group of abortion providers filed a lawsuit to block Texas state judges from enforcing the law and court clerks from accepting lawsuits that allege violations. But a federal appeals court late last month effectively paused the legal challenge, prompting the group's emergency request to the Supreme Court.
The challengers argue the law violates the constitutional right to abortion first recognized in the landmark 1973 decision in Roe v. Wade, which prohibits states from banning abortion before a fetus is viable, typically around 24 weeks of pregnancy.
The Texas law contains a novel mechanism that authorizes private citizens to sue those who perform or aid the procedure in violation of the measure, providing for at least $10,000 for each successful suit.
In its brief unsigned order Wednesday, the majority said it rebuffed the emergency request in part because it was unclear whether the named defendants in suit — primarily court and state officials — “can or will seek to enforce the Texas law against the applicants in a manner that might permit our intervention.”
Roberts, in dissent, said it appeared that the Texas law aimed to “to insulate the State from responsibility for implementing and enforcing” its restrictive abortion law, calling the legislative design “not only unusual, but unprecedented.”
“I would grant preliminary relief to preserve the status quo ante — before the law went into effect — so that the courts may consider whether a state can avoid responsibility for its laws in such a manner,” wrote Roberts, who was joined by liberal justices Stephen Breyer and Elena Kagan.
Breyer wrote a separate dissent, as did Kagan, who called the Texas law “patently unconstitutional.”
The five conservative justices who comprised the majority added that their ruling did not seek to resolve questions about “the constitutionality of Texas’s law” or foreclose future lawsuits over the measure.
The landmark 1973 decision in Roe could be in jeopardy next term, however, when the Supreme Court, with a 6-3 conservative majority, reviews a Mississippi law that bans abortion after 15 weeks.
Texas