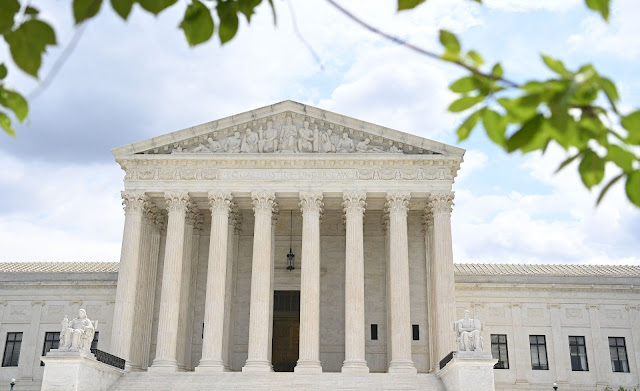 A Senate panel has set its sights on the Supreme Court’s increasingly common practice of deciding weighty cases on an emergency basis, a procedure the justices used this week to greenlight Texas’s severe curtailment of abortion access.
Sen. Dick Durbin (Ill.), the Senate Judiciary Committee’s top Democrat, announced Friday that the committee would hold a hearing on the court’s so-called shadow docket, which often produces consequential rulings without the justices having received a comprehensive set of paper briefs or hearing oral arguments.
The court recently used the truncated process to rule on significant disputes over immigration policy and federal eviction protections, and to leave intact a new Texas law that bans most abortions in the country’s second-most populous state.
“The Supreme Court must operate with the highest regard for judicial integrity in order to earn the public’s trust,” Durbin said in a statement. “This anti-choice law is a devastating blow to Americans' constitutional rights — and the Court allowed it to see the light of day without public deliberation or transparency.”
“At a time when public confidence in government institutions has greatly eroded, we must examine not just the constitutional impact of allowing the Texas law to take effect," he continued, "but also the conservative Court’s abuse of the shadow docket.”
Although the shadow docket itself is not new, the Supreme Court had previously used the truncated process only sparingly to render decisions of major consequence. The practice, however, became more commonplace during the Trump administration.
Just before midnight on Wednesday, the Supreme Court used the procedure to issue a 5-4 ruling that denied an emergency request from abortion providers who sought to block the Texas law. The statute, which is now the country's most restrictive abortion law, prohibits the procedure after the presence of a fetal heartbeat is detected, usually around six weeks into pregnancy.
An estimated 85 to 90 percent of women who get an abortion in Texas are at least six weeks into their pregnancy, and the burden is expected to fall most heavily on teens, people of color and women living in rural areas, experts said. The law only makes exceptions for medical emergencies, with no exemptions for pregnancy resulting from incest or rape.
The Texas law gives enforcement authority to private citizens, allowing them to sue those who perform or aid the procedure in violation of the measure, and provides for $10,000 for a successful lawsuit.
In a brief unsigned order on Wednesday, the court’s five-member majority pointed to the procedural complexities arising from this unique legislative design to explain their refusal to block the Texas law, despite noting “serious questions” about its constitutionality.
The constitutional right to abortion, first recognized in the court’s landmark 1973 decision in Roe v. Wade, prohibits states from banning abortion before a fetus is viable, typically around 24 weeks of pregnancy.
Chief Justice John Roberts joined the court's three liberal justices in dissent, with each of the four writing their own opinions. Justice Elena Kagan in her dissent called the law “patently unconstitutional” and criticized the majority for using the court’s shadow docket to reach its ruling.
“Today’s ruling illustrates just how far the Court’s ‘shadow-docket’ decisions may depart from the usual principles of appellate process,” Kagan wrote, noting that the majority had issued a ruling of “great consequence” without guidance from a federal appeals court that is reviewing the Texas law and only after “the most cursory” court briefs from the parties.
“In all these ways, the majority’s decision is emblematic of too much of this Court’s shadow-docket decision making — which every day becomes more unreasoned, inconsistent, and impossible to defend,” she added.
Kagan’s criticism echoed that of fellow liberal Justice Stephen Breyer, who last week expressed misgivings about the practice.
Breyer, in a dissent that was joined by the court’s two other liberals, criticized the majority for using the shadow docket to effectively end the Centers for Disease Control and Prevention’s (CDC) eviction moratorium, even as the U.S. contends with the highly contagious delta variant of COVID-19 and despite unanswered questions over the legal dispute.
“These questions call for considered decision making, informed by full briefing and argument,” Breyer wrote in an eight-page dissent. “Their answers impact the health of millions. We should not set aside the CDC’s eviction moratorium in this summary proceeding. The criteria for granting the emergency application are not met.”
Earlier last week the Supreme Court used its shadow docket to deny a Biden administration request to halt a lower court order that reinstated a controversial Trump-era immigration policy.
The court's three liberals indicated they would have stepped in to temporarily block the policy, which requires asylum-seekers at the southern border to remain in Mexico while their applications are processed.
Texas