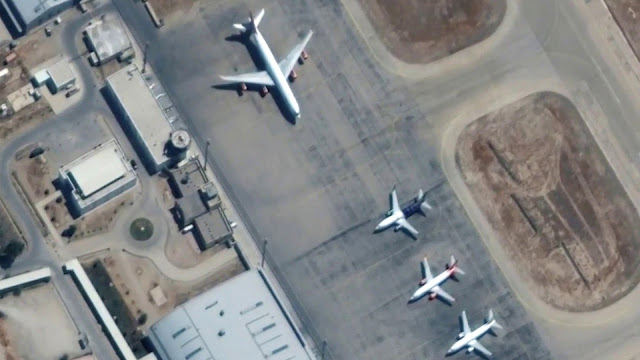 The Taliban are refusing to allow flights to leave with evacuees from the Mazar-i-Sharif Airport in northern Afghanistan, including Americans and green-card holders, according to reports and an NGO with staff waiting to fly out.
The State Department sent an email to members of Congress saying that several charter flights are cleared to fly from Mazar-i-Sharif to Doha, Qatar, “if and when the Taliban agrees to takeoff,” CBS News reported. State Department sources told CBS that American citizens and permanent residents are among those prevented from flying out.
It was not immediately clear why the Taliban are refusing to let the planes take off. An Afghan official at the Mazar-i-Sharif airport, who asked not to be identified, said many passengers were Afghans who did not have the correct travel documents needed to leave, in comments to the Associated Press.
The State Department sources told CBS that the Taliban’s refusal to allow the flights to take off did not resemble a hostage situation. However, the situation on the ground is a “bad scene,” Marina LeGree, executive director of the NGO Ascend, which teaches young women leadership skills through mountaineering, told National Review in emailed comments.
According to LeGree, there were initially 600 people from various groups trying to leave via Mazar-i-Sharif, but that number has ballooned to 1,200 to 1,300 passengers. There are about 30 Ascend staff, participants, and some family members trying to leave via the airport, including two U.S. green-card holders.
“We know of 19 others in the larger group that have [American] citizenship,” LeGree said.
“I can tell you that our people are stuck in a dangerous situation,” Legree added. “No one is putting a gun to their heads and locking them in a room, but they have traveled from Kabul, they . . . cannot feasibly travel back safely,” and the Taliban are not allowing planes to take off.
There are six flights in total, all run by Afghan airliner Kam Air, according to LeGree. The Afghan official told the AP that there are four flights.
A State Department spokesperson said they were not able to confirm details of the flights.
“We do not have personnel on the ground, we do not have air assets in the country, we do not control the airspace — whether over Afghanistan or elsewhere in the region,” the spokesperson says. “Given these constraints, we also do not have a reliable means to confirm the basic details of charter flights, including who may be organizing them, the number of U.S. citizens and other priority groups on-board, the accuracy of the rest of the manifest, and where they plan to land, among many other issues.”
Representative Michael McCaul (R., Texas), the top Republican on the House Foreign Affairs Committee, earlier in the day warned of a potential hostage situation, in an interview on Fox News Sunday. McCaul’s office did not respond to a request for comment.
“We have six airplanes at Mazar-i-Sharif Airport . . . with American citizens on them as I speak, also with these interpreters, and the Taliban is holding them hostage for demands right now. . . . This is really turning into a hostage situation where they’re not going to allow American citizens to leave until they get full recognition from the United States of America,” McCaul said.
World