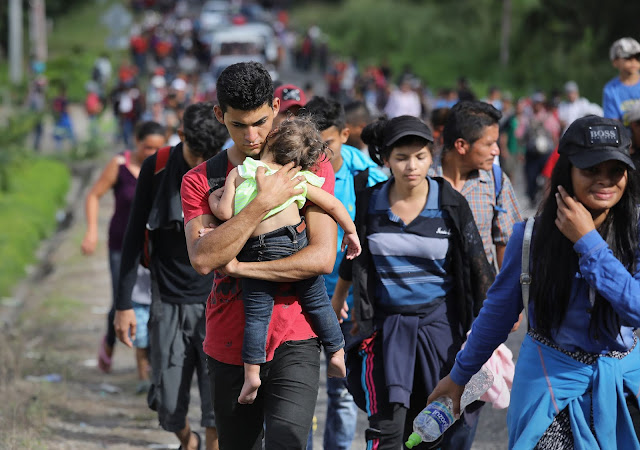 A caravan with 400 migrants has left southern Mexico and is headed to the U.S., Reuters reported.
A witness told the news agency that the caravan, mostly comprised of Haitians and Central Americans, left the southern Mexican city of Tapachula early Saturday morning.
The group of migrants said that they were fleeing their poverty-stricken, violence-riddled native countries for a fresh new start, according to Reuters.
A Honduran citizen reportedly said that she had to try to enter the U.S., adding she is scared she won’t get any work in her native country.
Sharon, 31, declined to give her first name and said she sold chewing gum in Honduras, and struggled to support her three children, according to Reuters.
Mexican President Andres Manuel Lopez Obrador has ordered all undocumented migrants to stay on the southern border of the country, and asked the Biden administration to help find migrants’ work.
There have been reports of Mexican officials brutally treating migrants in the caravan, with Mexico’s National Migration Institute (NMI) condemning the incidents, Reuters noted.
A Guatemalan migrant named Bertha told the news agency that IMN agents took three of her sons away when she went to get them something to eat, and one of her daughters was detained by authorities a day earlier.
"They took them away," Bertha said.
In 2018, President Trump called a caravan of Central American migrants heading toward the U.S.-Mexico border an "invasion" and pledged to use the military to stop people from entering the U.S.
Trump, offering no evidence, claimed there were "Many Gang Members and some very bad people" traveling in the caravan.
Last October, Guatemala said that it would detain and return a caravan of approximately 2,000 Hondurans who crossed its borders in their journey to the United States.
World