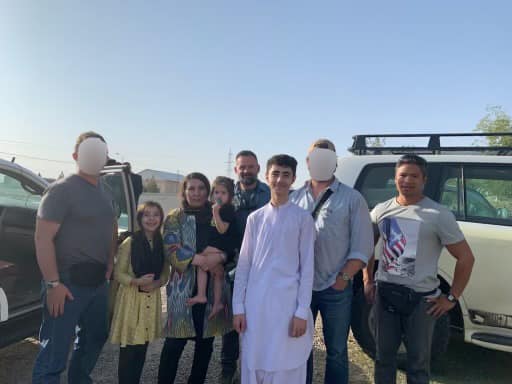 The United States has evacuated four Americans from Afghanistan into a bordering country, a State Department official said on Monday, in the first U.S.-facilitated overland evacuation since the Aug. 31 pullout.
Roughly 124,000 people were evacuated last month from Kabul in a massive U.S.-led airlift of U.S. and other foreign citizens as well as vulnerable Afghans as the Taliban took control there.
U.S. officials have said about 100 more citizens who have said they want to leave remain in Afghanistan.
"We have facilitated the departure of four American citizens from Afghanistan via an overland route. Our Embassy greeted the Americans as they crossed the border into the third country," the official said without elaborating.
U.S. Representative Ronny Jackson identified the four as being from his district in Texas, saying they left "after 2 weeks & multiple life threatening attempts."
"After 2 weeks and multiple life threatening attempts, I am overjoyed to share that 4 U.S. citizens from #TX13 were part of the first successful ground evacuation since the U.S. left Kabul. Thank you to Cory Mills and the other patriots on his team for saving these BRAVE Americans!" Jackson said.
With U.S. troops gone, the evacuation flights over, and commercial fights avoiding Kabul's airport, which has no air traffic control, thousands of Afghans are focused on potentially hazardous overland escape.
Countries bordering Afghanistan include Pakistan, Tajikistan, Uzbekistan, Turkmenistan and Iran.
The State Department on Sunday published a declaration by around 100 countries committed to helping Afghans reach destinations outside Afghanistan. However, none of Afghanistan's neighbors signed up. read more
Tajikistan has pledged to accept 100,000 Afghan refugees, while Uzbekistan committed to allow transit through its territory for Americans and potentially others from Afghanistan. But it was not clear how many people, if any yet, both countries have actually allowed in.
Pakistan – home to more than 1.4 million Afghan refugees - has admitted some 2,000 Afghans employed by foreign missions, international institutions, and non-governmental groups on one-month transit visas, said a diplomatic source on condition of anonymity.
Local