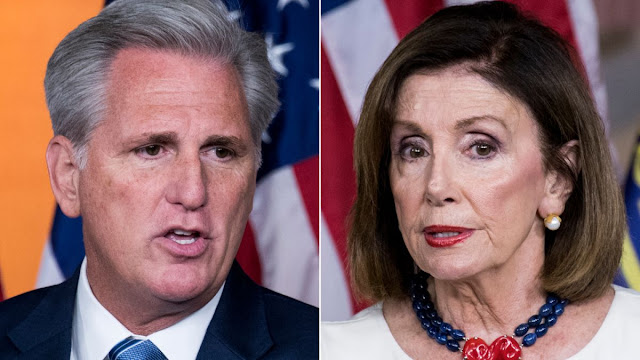 House Republicans are seizing on the absence of their Democratic colleagues in Washington by launching a full-scale political attack on President Biden and his top aides after the deadly withdrawal of U.S. forces from Afghanistan.
While congressional Democrats have been largely silent after Monday’s official end to the war, with many back in their congressional districts for the final three weeks of the summer recess, House Minority Leader Kevin McCarthy (R-Calif.) in recent days has held a pair of news conferences in the Capitol demanding that Speaker Nancy Pelosi (D-Calif.) call the House back into session.
McCarthy also convened a roundtable of two dozen Afghanistan vets, including Reps. Dan Crenshaw (R-Texas) and Brian Mast (R-Fla.), to press for action.
And 30 Republicans unsuccessfully tried to force a vote on the House floor Tuesday demanding more accountability from the Biden administration. Rep. Debbie Dingell (D-Mich.), a Pelosi ally presiding in the chamber, refused to recognize the Republicans and quickly gaveled the session closed.
“Never in my lifetime would I ever believe America would have an administration knowingly make a decision to leave Americans behind … We now have Americans stuck in Afghanistan, the Taliban in charge with more weaponry than they've ever had in the past, and a border that is open,” McCarthy, flanked by dozens of GOP colleagues, said at a news conference in the otherwise sleepy Capitol.
“Speaker Pelosi, now was not the time to act like you could not see us on the floor, now was not the time to hide,” he continued. “We are a co-equal branch. Now is the time for leadership in Congress, and we will lead.”
That those entreaties are sure to fail is not the point. With their full-court pressure campaign, GOP leaders are hoping not only to highlight the tragic U.S. exit from Afghanistan after 20 years of war, but also to fasten the blame for a series of eleventh hour fiascos — including the death of 13 U.S. soldiers at the hands of a suicide bomber last week — squarely on the shoulders of Biden and several of his top political lieutenants, Secretary of State Antony Blinken and national security adviser Jake Sullivan.
The strategy carries risks, since the momentum for a full withdrawal from Afghanistan originated with former President Trump, who championed the idea as a way to focus U.S. resources on domestic problems. Trump’s position has lent Biden plausible claims that he was simply following through on a popular plan to bring the troops home after two decades of increasingly futile conflict and mission creep.
But Trump is no longer in the White House; Biden is standing firmly behind his steadfast withdrawal timeline, declaring Tuesday that he was “not going to extend this forever war”; and Republicans on and off of Capitol Hill are betting the issue becomes a liability for Democrats in next year’s midterm elections, when both chambers are up for grabs.
“This president announced complete withdrawal with no conditions, time certain — that was a surrender of the United States to the Taliban. Now they're celebrating their victory over the United States of America. I never thought I would see this in my life,” said Rep. Mike McCaul (R-Texas), who will become chairman of the Foreign Affairs Committee if the GOP takes the House next year.
“It's embarrassing, it’s shameful and it's wrong to our veterans who served so well. We've emboldened our adversaries and we've weakened our alliances.”
Pelosi, who will promote Biden's "Build Back Better" agenda in Texas on Thursday, has dismissed McCarthy’s attacks as “empty stunts” and knocked the GOP leader for making inconsistent statements about what he believes U.S. policy should be in Afghanistan.
In a last-minute news conference Friday, McCarthy first said he believed U.S. troops should not remain in Afghanistan, then moments later said he would have “maintained” Bagram Air Base.
McCarthy also slammed Biden for negotiating with the Taliban to try to ensure safe passage for Americans evacuating Kabul; reporters noted that Trump himself had negotiated the deal to pull all U.S. troops out of Afghanistan.
The California Republican on Tuesday dodged questions about whether he agreed with many of his rank-and-file members that Biden should resign or be impeached over his handling of the evacuation.
“McCarthy has been on every side of the debate over Afghanistan – except the side of our troops,” Pelosi’s office said in a statement Tuesday moments before McCarthy spoke to reporters.
“President Biden ended the longest war in American history while Minority Leader McCarthy spent the week putting self-promotion over the safety of American soldiers risking their lives to evacuate more than 120,000 from a war zone.”
What Pelosi calls self-promotion, McCarthy considers congressional oversight and a legislative check on an executive branch careening off course. On Tuesday, he and 30 colleagues attempted to pass a bill by Rep. Mike Gallagher (R-Wis.) that would force the Pentagon to submit daily status reports to Congress on the evacuation of U.S. citizens and Afghan civilians.
Two days earlier, McCarthy sent a letter to rank-and-file Republicans outlining other efforts to hold Democrats’ feet to the fire. “Should the Speaker continue to shrink from her responsibility,” he vowed, Republicans will file a discharge petition to try to force a vote on legislation to help the military bring Americans home.
Republicans also will use markups of the massive defense authorization bill and the Democrats’ $3.5 trillion reconciliation package to force votes on Afghanistan-related legislation. And Republicans are gearing up for a slew of investigations if they take the House in 2022, firing off letters to federal agencies demanding that they preserve records related to the decision-making process surrounding the Afghanistan withdrawal.
“We must exert maximum pressure on the Democrat majority with our amendments and debate during these Committee sessions,” McCarthy wrote.
“Once every American is evacuated and our service members are back on American soil,” he added, “Congress must swiftly investigate how we got here and hold the Biden administration accountable for its errors.”
National