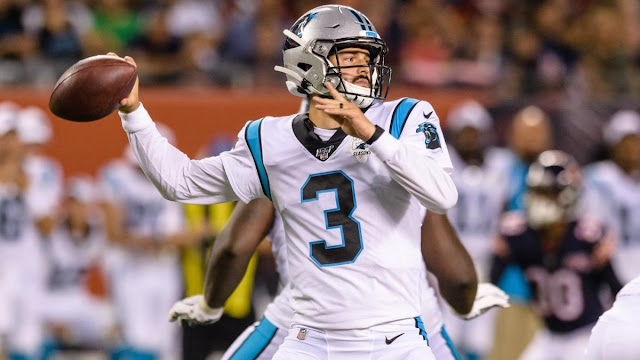 The Cowboys seemingly declared a winner of their backup quarterback competition on Tuesday, releasing both Ben DiNucci and Garrett Gilbert to leave fifth-year reserve Cooper Rush as the only signal-caller behind Dak Prescott. A day later, they've added a notable name to the room in Will Grier, claiming the former Panthers backup off waivers. It's unclear just yet what Grier's addition means for Rush, but at the very least, the former is primed to compete for No. 2 duties behind Prescott.
Rush, who received an endorsement from Cowboys owner Jerry Jones after beating out Gilbert and DiNucci for the top backup spot, has been with Dallas in varying capacities since 2017. Undrafted out of Central Michigan, he's appeared in just five career games, while also serving a brief stint with the Giants in 2020, when Dallas signed Andy Dalton as Prescott's No. 2. CBS Sports' Patrik Walker reports Rush's roster spot is "probably" safe despite Grier's addition, though nothing is guaranteed.
Grier, 26, edges Rush in starting experience, albeit just barely. The former West Virginia standout, a third-round pick of Carolina in 2019, started two games as a rookie, throwing a combined four interceptions in back-to-back losses with the Panthers. Former XFL star P.J. Walker unseated Grier as the top backup to Teddy Bridgewater in 2020, however, and remained ahead of Grier this summer, backing up Sam Darnold. Grier did flash his running ability in the preseason with a 24-yard touchdown run against the Steelers.
The Cowboys may not be done at QB, either. Nick Eatman, of the team's official website, said Wednesday he "100 percent" expects Dallas to look into Cam Newton, who was just released by the Patriots after a competition for New England's starting job. Newton may not be ready to accept a purely backup role, which he would have in Dallas, but it's clear, Eatman implied, that the Cowboys will consider further alternatives as Prescott insurance.
Sports