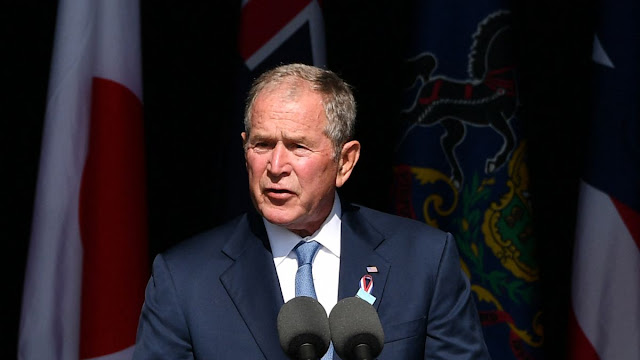 Former President George W. Bush warned of the threat posed by domestic extremist groups on the 20th anniversary of the Sept. 11, 2001, terror attacks, arguing that there are similarities between “violent extremists abroad” and those “at home.”
In remarks at a memorial ceremony near Shanksville, Pa., the site of one of four plane crashes on 9/11, Bush said that even two decades later, “many Americans struggle to understand why an enemy would hate us with such zeal.”
“The security measures incorporated into our lives are both sources of comfort and reminders of our vulnerability,” he said.
The former president, who was in office at the time of the 2001 attacks, went on to say that Americans “have seen growing evidence that the dangers to our country can come not only across borders but from violence that gathers within.”
Bush’s mention of domestic extremism comes as the Department of Homeland Security (DHS) in recent weeks has warned of heightened security threats within the U.S. in the aftermath of the Biden administration’s withdrawal from Afghanistan.
Last month, a DHS bulletin warned that the 20th anniversary of the 2001 terror attacks could serve as a catalyst for targeted violence and that domestic extremists and anti-government activists could also be spurred to action by the coronavirus pandemic.
Bush acknowledged on Saturday that while “there is little cultural overlap between violent extremists abroad and violent extremists at home,” there are commonalities in their “disdain for pluralism, in their disregard for human life, in their determination to defile national symbols,” apparently alluding to the Jan. 6 attack on the U.S. Capitol.
“They are children of the same foul spirit, and it is our continuing duty to confront them,” he added.
Bush said earlier this year that he was "disgusted" by the Capitol riot, when a mob of pro-Trump supporters attempted to delay Congress's ratification of President Biden's electoral victory. In a statement after the Capitol was breached on Jan. 6, Bush said he was "appalled by the reckless behavior of some of our leaders since the election and by the lack of respect shown today for our institutions, our traditions, and our law enforcement."
"The violent assault on the Capitol — and disruption of a Constitutionally-mandated meeting of Congress — was undertaken by people whose passions have been inflamed by falsehoods and false hopes," Bush said at the time. "Insurrection could do grave damage to our Nation and reputation. In the United States of America, it is the fundamental responsibility of every patriotic citizen to support the rule of law."
Bush was joined on Saturday by former first lady Laura Bush as well as Vice President Harris and second gentleman Doug Emhoff at the site near Shanksville where Flight 93 crashed into an empty field after passengers and crew members were able to overtake al Qaeda hijackers and divert the plane from what was believed to have been the intended target on 9/11 — the U.S. Capitol.
Bush also used the address to commend the unity and resilience displayed by Americans following the 2001 attacks and called on citizens to reject politics of “fear and resentment.”
“Malign force seems at work in our common life that turns every disagreement into an argument and every argument into a clash of cultures,” he said.
“On America's day of trial and grief, I saw millions of people instinctively grab for a neighbor's hand and rally to the cause of one another,” he explained. “That is the America I know.”
The former president's comments also follow concerns that have grown on the potential for targeted attacks against Afghan refugees arriving in the U.S. after the weeks-long evacuation of U.S. citizens and Afghan allies from Afghanistan following the Taliban's consolidation of power.
John Cohen, the head of the DHS Office of Intelligence and Analysis, reportedly said on a call with law enforcement officials earlier this month that white supremacist and other violent extremist groups online have perpetuated narratives that “may incite violent activities directed at immigrant communities, certain faith communities or even those who are relocated to the United States.”
National