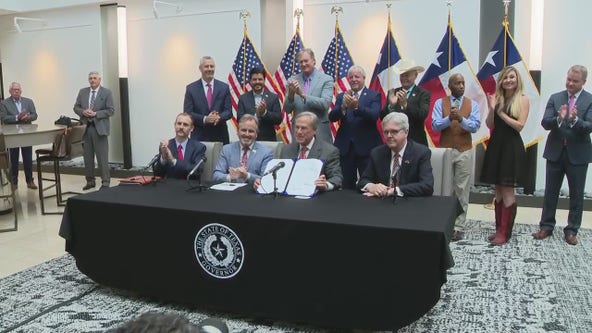 Texas Gov. Greg Abbott (R) on Tuesday signed a sweeping overhaul of his state’s election procedures after months of delay caused by Democrats who sought to block the bill they say will disenfranchise voters.
Abbott made the measure his top priority in two special legislative sessions he called over the summer, the first of which ground to a halt when state House Democrats denied majority Republicans a quorum by fleeing to Washington, D.C.
The legislature approved the bill last week and Abbott signed the measure in Tyler, accompanied by Lt. Gov. Dan Patrick (R) and Sen. Bryan Hughes (R), the lead Senate sponsor of the measure.
"Election integrity is now law in the state of Texas," Abbott said.
The measure bars round-the-clock polling stations and places new restrictions on drive-through voting and voting by mail. It will give more authority to partisan poll watchers who can observe an election, and it increases the requirements for identification voters must show when they cast a ballot.
The bill will also prevent elections officials from distributing vote-by-mail applications to voters who have not specifically requested them, after registrars and county clerks in large Texas counties sent out applications in the midst of the coronavirus pandemic. It requires the Secretary of State’s office to check voter rolls every month in an effort to identify non-citizens who have improperly registered to vote.
Republicans say the new law is meant to restore integrity in the electoral process, almost a year after former President Trump lost re-election and began spreading disinformation about the results.
“One thing that all Texas can agree and that is that we must have trust and confidence in our elections,” Abbott said Tuesday, adding the bill “ensures that every eligible voter will have the opportunity to vote.”
He pointed to provisions of the bill that expand early voting hours during the 12 days prior to an election in which voters can cast their ballots.
“Texas provides 12 days of early voting and this law even adds more hours during those early voting days. By comparison, the president’s home state of Delaware provides zero days and zero hours of early voting,” Abbott said. “It ensures that Texas provides even more opportunities for people to engage in the voting process than the president’s home state of Delaware as well as many other states across the entire country.”
Trump carried Texas and its 38 electoral votes by almost six percentage points, earning the lowest vote share of any Republican presidential nominee in Texas since Bob Dole in 1996.
The ink from Abbott’s pen had not yet dried when a prominent Democratic election lawyer announced plans to sue the state to block the law from taking effect.
The lawyer, Marc Elias, said his team had sued on behalf of four Texas organizations: Two Hispanic advocacy groups, a retiree organization and the state’s largest teacher’s union. The lawsuit will challenge the law under the First and Fourteenth amendments to the Constitution, and under two sections of the Voting Rights Act.
“Year after year, Texas has one of the lowest voter turnout rates in the country, yet Republicans in the state remain intent on limiting access to the ballot box, particularly for voters of color,” Elias said in an email. “After Texas Democrats blocked the passage of past iterations fo the bill in the regular legislative session and the first special session, Republicans finally achieved their goal of enacting a law, Senate Bill 1, that limits almost every method of voting in the state.”
Many of the provisions in the new law are aimed squarely at Harris County, Texas’s largest and the home of Houston. Harris County elections officials infuriated state Republicans by holding polls open around the clock during early voting, and by encouraging voters to cast ballots from their cars at drive-through stations.
Harris County officials planned to send absentee ballot applications to every registered voter, though the Texas Supreme Court blocked the plan in the months before Election Day.
Texas