Whom should we recognize as the government of Afghanistan? 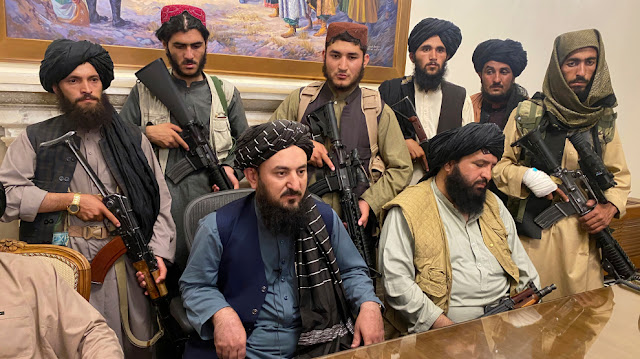 With the collapse of the U.S.-supported Afghan government, there’s a question many countries will have to face soon: Whom should we recognize as the government of Afghanistan?
The last time the Taliban ruled Afghanistan, from 1996 to 2001, only three countries recognized it as the legitimate government of the country: Saudi Arabia, the United Arab Emirates, and Pakistan. Most of the rest of the world recognized the Islamic State of Afghanistan, the government established in 1992, as the government-in-exile.
The government-in-exile approach seems less likely this time around. This time, the defeat of the Afghan government is seen by many as a clear defeat for the United States. Adversaries of the United States may want to recognize the Taliban government to register their opposition to American influence.
According to an August 15 story from the Washington Examiner, “China has been laying the groundwork to recognize the Taliban as the legitimate government of Afghanistan, flying in the face of the U.S. warning the group about isolation from the international community.”
A spokesman for Vladimir Putin said yesterday that, “We think that the Taliban’s dominance, the de facto rise to power of the Taliban in Afghanistan and them taking most over the country under their control is de facto an accomplished process,” hinting that recognition could be coming in the near future.
Iranian president Ebrahim Raisi could barely contain his glee at what he called the U.S. “defeat” in Afghanistan. “The Islamic Republic of Iran believes that the reign of the will of the wronged people of Afghanistan has always created security and stability. . . . While consciously monitoring developments in the country, Iran is committed to neighbourly relations,” he was quoted as saying by Al Jazeera on August 16.
American allies have signaled hesitance to recognize the Taliban government over human-rights concerns. An August 20 statement from NATO foreign ministers said, “Any future Afghan government must adhere to Afghanistan’s international obligations; safeguard the human rights of all Afghans, particularly women, children, and minorities; uphold the rule of law; allow unhindered humanitarian access; and ensure that Afghanistan never again serves as a safe haven for terrorists.”
Pakistan, which is considered by the U.S. to be a major non-NATO ally, will be in a tricky spot. Imran Khan, the Pakistani prime minister, said Afghans had “broken the shackles of slavery” after Kabul fell to the Taliban. Boris Johnson told Khan a few days later that unilateral recognition of the Taliban government would be unacceptable. Pakistani recognition wasn’t as big a deal for the West last time around. It was pre-9/11 and Afghanistan was less of a global concern. But Pakistan has provided the Taliban with various forms of support and shelter over the years. As Walter Russell Mead wrote for the Wall Street Journal, “Whether Pakistan will be happy with its radical neighbor in the long term remains to be seen, but for now Pakistani hard-liners are celebrating the greatest single win in their history.”
The most interesting country to watch on recognition of the Taliban is India. Afghanistan is in India’s part of the world, so they can’t dodge the question. Since the middle of the Cold War era, India has prided itself on having an unconventional foreign policy that doesn’t fit neatly into anyone’s sphere of influence. Under the Trump administration, India moved slightly closer to the United States. Trump and Indian prime minister Modi had a warm personal relationship, and India is a member of the “Quad” alliance with the U.S., Australia, and Japan — which is becoming more important to oppose Chinese influence. There’s also India’s antagonistic relationship with Pakistan to factor in as well.
Today, a spokesman for the Indian Ministry of External Affairs said the Indian government is going to wait and see. Spokesman Arindam Bagchi said, “The situation on the ground is uncertain (in Afghanistan). The primary concern is the security and safety of people. Currently, there is no clarity about any entity forming a government in Kabul. I think we are jumping the gun regarding recognition,” according to the Hindustan Times.
Bagchi makes an important point: We aren’t really sure how stable the Taliban’s self-proclaimed Islamic emirate is. The Taliban isn’t the only group of bad guys with guns in Afghanistan. The same Hindustan Times story said that Indian external affairs minister S. Jaishankar said India is waiting to see “whether the new dispensation in Afghanistan will be solely a government of the Taliban or be part of a power-sharing arrangement with other Afghan leaders.”
The situation in Afghanistan is anything but settled. The country is called the “graveyard of empires,” but native governments haven’t fared much better in maintaining order throughout Afghanistan’s chaotic history. As countries decide what to do about diplomatic recognition, the Indian wait-and-see approach is one to keep an eye on.
Opinion