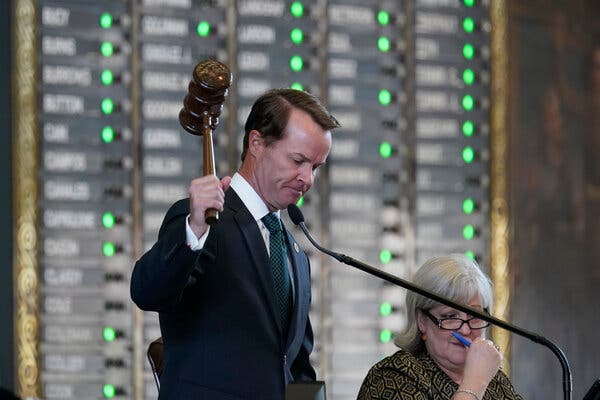 The Texas state House passed a sweeping election overhaul bill on Friday after months of partisan fighting and a quorum-breaking walkout by Texas Democrats who had sought to stop the measure in its tracks.
The 80-41 vote on SB 1 lowered the curtain on a months-long fight by Texas Democrats to halt the legislation, which would implement a slew of new voting restrictions, like limits on early-voting hours and new voter ID requirements for mail-in voting.
The Texas state Senate will still have to vote on the measure before it can be sent to Gov. Greg Abbott’s desk.
Still, the House vote on Friday signaled that the longest battle yet over Republican efforts to clamp down on state election rules may be reaching an end.
Among the changes included in the legislation are bans on practices like drive-thru voting, as well as new limits on absentee ballot applications. The bill would also empower partisan poll watchers and create harsher penalties for voter fraud.
Democrats and voting rights activists say that the new restrictions would disproportionately impact voters of color and make it harder for them to cast their ballots. Republican-controlled legislatures in many other states have moved to pass new restrictions of their own in the months since former President Trump’s 2020 electoral loss.
State Democrats had managed to block previous iterations of the legislation by staging two quorum-breaking walkouts.
In July, Abbott called a special session of the legislature to consider the election bill, among other measures. Intent on delaying the legislation, a group of 50 House Democrats jetted off to Washington, D.C., where they met with members of Congress and Vice President Harris in an effort to push federal voting rights legislation.
The special legislative session eventually expired, but Abbott called a new one. By that time, the Democrats who had fled had returned to Texas, allowing the chamber to return to work.
Texas State House Democratic Caucus Chair Chris Turner said on Friday that his party had never been under the impression that they would be able to halt SB 1 permanently, and reiterated his call for lawmakers in Washington to pass federal elections legislation, particularly the John Lewis Voting Rights Advancement Act. The U.S. House approved that bill earlier this week.
“From the very beginning of this fight, we knew we wouldn’t be able to hold off this bill forever,” Turner said. “That’s why federal voter protection legislation is essential. Our 38-day quorum break and hard work in Washington, D.C. led to the U.S. House passing the John Lewis Voting Rights Advancement Act sooner than anticipated.
“Now, the U.S. Senate must do the same to protect Texas voters from continued Republican attacks on their freedom to vote.”
The Texas state Senate approved the elections bill earlier this month, but the version passed by the House included changes. The Senate can vote on the legislation passed by the House or send the two versions to a conference committee to hammer out the differences.
Texas