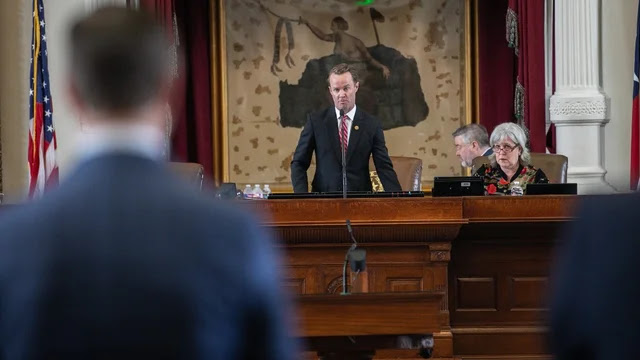 The Texas House on Thursday moved forward a GOP-backed elections bill following Democrats’ more than a month-long boycott of the legislation set to impose sweeping restrictions on voting in the state.
The state House voted 79-37 to advance a slightly revised version of the Senate-passed bill following 12 hours of floor debate, during which Democrats offered more than three dozen amendments to the legislation, according to the Texas Tribune.
The bill, which Democrats argue would impose unfair restrictions on marginalized groups like people of color and those with disabilities, is expected to receive final approval by the House on Friday.
The sweeping elections bill includes among its provisions a ban on drive-thru and 24-hour voting and requirements for poll watchers to receive a training manual from the Texas secretary of state.
Republicans have defended the legislation as a way to restore confidence in the integrity of elections, which was repeatedly called into question following the 2020 presidential election through unsupported claims of widespread fraud advanced by former President Trump and his allies.
At the beginning of House debate Thursday, state GOP Rep. Andrew Murr, who authored the legislation, explained, “The point that I make to you today is that Texas has consistently reviewed its election law policy over time, making changes and updates as needed.”
“SB 1 continues this process,” he added, referring to the official name for the elections bill.
Among the amendments approved to the bill Thursday include revising a portion of the bill that protected poll watchers, now allowing them to be removed without warning if they violate the state’s penal code, according to the Tribune.
The movement on the legislation Thursday comes a week after several Texas House Democrats returned to Austin after fleeing the state capital last month to prevent the lower chamber from achieving a quorum needed to vote on legislation.
Gov Greg Abbott (R), who has fervently pushed for passage of the elections bill, called for a special session, which ultimately ended due to House Democrats' opposition.
During a second special session, House Democrats continued their boycott, prompting Texas House Speaker Dade Phelan (R) to threaten to have Democrats arrested and brought back to the chamber.
Texas