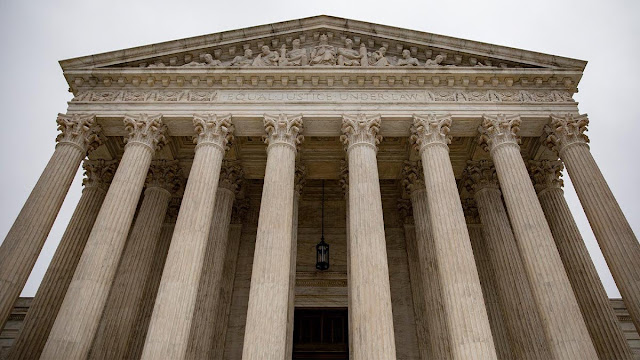 A divided Supreme Court on Thursday blocked an eviction freeze put in place by the Biden administration to shield cash-strapped tenants from the coronavirus pandemic.
In a ruling that appeared to break along familiar ideological lines, the conservative-majority court lifted the stay on a federal judge’s order which found the Centers for Disease Control and Prevention’s (CDC) eviction moratorium unlawful.
“The equities do not justify depriving the applicants of the District Court’s judgment in their favor,” the justices wrote in an unsigned order. “The moratorium has put the applicants, along with millions of landlords across the country, at risk of irreparable harm by depriving them of rent payments with no guarantee of eventual recovery.”
The court’s three liberal justices wrote in dissent, noting that stripping the federal protections may result in crowded living conditions where “the doubly contagious Delta variant threatens to spread quickly.”
The move comes after the Biden administration enacted an eviction freeze earlier this month aimed at areas with high infection rates as the U.S. contends with the highly contagious delta variant of the coronavirus.
The court’s Thursday ruling handed a win to a landlord group that has been fighting since last fall to block the federal eviction suspension, which has cost property owners some $19 billion each month.
Led by the Alabama Association of Realtors, the challengers had previously notched a key victory when a federal judge in Washington, D.C., ruled in May that the CDC measure amounted to an illegal government overreach.
But the judge, Dabney Friedrich, agreed to delay enforcement of her decision, citing the risk to public health if evictions were allowed to proceed. The justices’ move Thursday, though, lets Friedrich’s ruling take effect as the Biden administration weighs its next move.
The Justice Department, which has defended the eviction freeze on behalf of the administration, did not immediately respond when asked if it would continue to pursue an appeal of the underlying decision by Friedrich, a Trump appointee.
The White House expressed disappointment over Thursday’s ruling and called on all entities with a hand in evictions — from state and local governments, to courts, landlords and executive agencies — to mitigate the fallout.
“The Biden Administration is disappointed that the Supreme Court has blocked the most recent CDC eviction moratorium while confirmed cases of the Delta variant are significant across the country,” White House press secretary Jen Psaki said in a statement. “As a result of this ruling, families will face the painful impact of evictions, and communities across the country will face greater risk of exposure to COVID-19.”
Some 15 million people are currently behind on rent in the U.S., according to one recent estimate, though it was not immediately clear how many tenants could be placed at greater risk of eviction as a result of the court’s move. A patchwork of state and local eviction freezes were unaffected by Thursday's ruling.
The latest legal wrangling over the eviction freeze marks the second time the Supreme Court has addressed the measure in recent months.
In June, a 5-4 court rejected the landlords’ bid to block the policy, with Justice Brett Kavanaugh in the majority. At that time, Kavanaugh said Congress would need to pass new legislation for the CDC to lawfully push the previous moratorium past its July 31 expiration date.
But Congress did not renew the policy. Instead, the Biden administration in early August acted unilaterally to renew the lapsed eviction freeze through early October, prompting this latest round of court fights.
In Thursday’s ruling, the court again singled out Congress’ inaction.
“Congress was on notice that a further extension would almost surely require new legislation,” the court wrote, “yet it failed to act in the several weeks leading up to the moratorium’s expiration.”
Justice Stephen Breyer, one of the court’s more liberal members, wrote an 8-page dissent that was joined by fellow liberal justices Sonia Sotomayor and Elena Kagan. The trio blasted the majority for substituting its judgment for that of public health officials.
“The public interest strongly favors respecting the CDC’s judgment at this moment, when over 90% of counties are experiencing high transmission rates,” Breyer wrote.
The CDC policy, originally enacted in September and subsequently extended several times, has aimed to protect tenants who state under penalty of perjury that they are unable to pay rent and would face overcrowded conditions if evicted.
The measure aimed in part to provide an additional layer of protection while emergency federal rental aid made its way to tenants. But the Treasury Department on Wednesday said only some $5 billion of the roughly $46 billion allocated for emergency rental aid had been distributed by state governments.
National