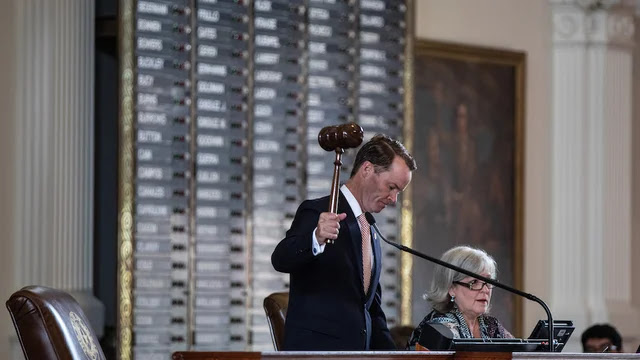 Texas State House Speaker Dade Phelan (R) on Thursday banned the word "racism" in the chamber after tensions flared while debating the highly disputed voting rights bill, ABC 13 reported.
"While we may have strong disagreements on the legislation and policy that will be debated, our rules require that we conduct ourselves in a civil manner and treat our colleagues with respect," Phelan said of the ban on the word.
"We can talk about racial impacts with this legislation without accusing members of this body of being racist," Phelan said.
The Speaker's move came after the controversial bill was brought to the floor for a vote. While debating the bill, the word "racism" came into play, prompting Phelan to ban the word.
The bill advanced Thursday night, setting a final vote in the chamber for Friday.
In mid-July, numerous House Democrats broke quorum and left Texas in an attempt to block the legislation. Now that enough members have returned, the House regrouped to debate and vote for the first time since May.
Democrats fought back against Phelan's ban, saying that the bill is racist and greatly impacts minorities. Others said that the word was directed toward the bill, not at individual Republicans in the room.
Lawmakers proposed nearly 70 amendments, a majority of them by Democrats. The election bill debate reportedly lasted 90 minutes, with the majority of the debate being spent on amendments, according to the ABC affiliate.
Texas