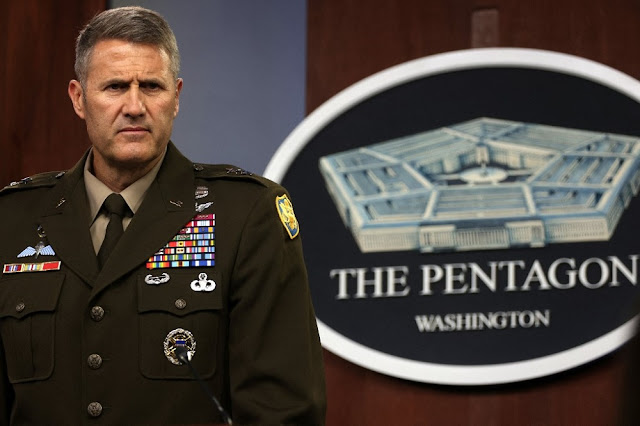 The Pentagon on Friday said the deadly attack outside Kabul airport the previous day was carried out by one suicide bomber and that there was not a second explosion at a nearby hotel.
“I can confirm for you that we do not believe that there was a second explosion at or near the Baron Hotel, that it was one suicide bomber,” Army Maj. Gen. Hank Taylor, deputy director of the joint staff for regional operations, told reporters at the Pentagon.
Thursday's bombing, which killed 13 U.S. service members and at least 100 Afghans, took place "right at" the Abbey gate at the Hamid Karzai International Airport in Kabul.
Defense officials initially said a second bombing had taken place outside the Baron Hotel, which is adjacent to the airfield and a key site in the effort to evacuate U.S. and British citizens.
But on Friday, Taylor said Defense officials don't know the source of that initial report.
“We’re not sure how that report was provided incorrectly, but we do know it’s not any surprise that in the confusion of very dynamic events like this can cause information sometimes to be misreported or garbled,” he said. "Details are continuing to be collected."
Eighteen service members who were wounded in the blast have since landed at Ramstein Air Base, a U.S. Air Force base in Germany, and have been transferred to Landstuhl Regional Medical Center for treatment, Taylor added.
Numerous Afghan civilians were also injured in Thursday's explosion. ISIS-K militants claimed responsibility for the attack.
Evacuations resumed after the bombing. Roughly 12,500 people were evacuated from Afghanistan on 89 flights in the 24 hours after the suicide bombing.
About 300 American citizens were included in the latest round of evacuations, bringing the total to 5,100 removed from the country since Aug. 14. Overall, the U.S. military has evacuated 111,000 people since the end of July.
National World