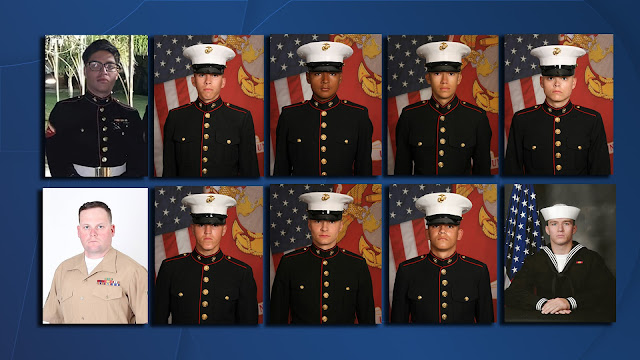 The Pentagon has identified the 13 U.S. service members who were killed in the bombing at the airport in Kabul, Afghanistan this week, the deadliest attack on U.S. forces in the country in a decade.
The Defense Department said 11 Marines, one Navy hospitalman and one Army staff sergeant were killed in the attack. The service members hailed from 10 states, including four from California.
Several of those killed had already been identified by their families on social media and in local media reports over the past two days, though the Pentagon on Saturday released a full list of those killed.
The Marines killed in the strike were identified as Staff Sgt. Darin Hoover, 31; Cpl. Hunter Lopez, 22; Cpl. Daegan Page, 23; Cpl. Humberto Sanchez, 22; Lance Cpl. Jared Schmitz, 20; Lance Cpl. David Espinoza, 20; Lance Cpl. Rylee McCollum, 20; Lance Cpl. Dylan Merola, 20; Lance Cpl. Kareem Nikoui, 20; Sgt. Nicole Gee, 23; and Sgt. Johanny Rosariopichardo, 25.
The blast also claimed the life of 22-year-old Navy Hospitalman Maxton Soviak and Army Staff St. Ryan Knauss, 23.
McCollum of Wyoming was one of the first victims identified in the attack. He was expecting a baby in about a month.
"I don't have words for how upset we are... this has just been absolutely devastating,” Mark Schmitz, father of Jared Schmitz, told KMOX radio station.
The father said the family was told at 2:40 a.m. that their son died in the attack at Kabul attack.
Nikoui of California was also identified by his family. His father Steve told The Daily Beast that he felt President Biden “turned his back” on his son.
The Navy released a statement regarding the single death in their branch Friday, saying Soviak “planned to make the Navy a career,” USA Today reported.
“We are incredibly proud of his service to our country," the statement reads.
Soviak only graduated from high school in 2017, with the superintendent from his school saying “He was a good kid, a good student and people just enjoyed being around him.”
"Thank you for your service to the United States of America and Laredo. Your acts of courage and bravery will always be remembered in our community," the City of Laredo said in a statement after discovering David Lee Espinoza, a native to the town, was among those killed in the attack.
Thursday's attack involved a suicide bombing outside of a gate at Hamid Karzai International Airport (HKIA), followed by ISIS gunmen opening fire on civilian and military forces.
More than 170 Afghans, two British nationals and the child of a British national were also killed in the attack.
National