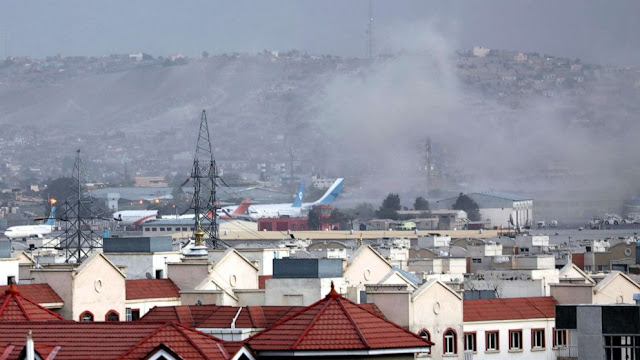 The Islamic State has claimed responsibility for the attacks outside the Kabul airport on Thursday, according to a statement from the group’s Amaq News Agency cited in multiple reports.
ISIS said in its statement that a suicide bomber “managed to reach a large gathering of translators and collaborators with the American army at 'Baran Camp' near Kabul Airport and detonated his explosive belt among them, killing about 60 people and wounding more than 100 others, including Taliban fighters,” according to Reuters.
The statement was accompanied by a photo of the suicide bomber with the caption “Abdul Rahman al-Lowgari who carried out the martyrdom operation near Kabul Airport,” according to Evan Kohlmann, an NBC analyst and the founder of intelligence organization Flashpoint.
Two suicide bombings occurred outside the Hamid Karzai International Airport in Kabul Thursday morning, killing at least 12 Americans and injuring 15 others, according to the Pentagon.
One of the explosions occurred right outside one of the gates at the airport where U.S. personnel were processing individuals prior to boarding evacuation flights, and the other took place near the Barton Hotel, which is adjacent to the airfield.
Marine Gen. Kenneth McKenzie, commander of U.S. Central Command, told reporters hours after the incident that the attacks were determined to be carried out by ISIS fighters.
“We have put more than 5,000 U.S. service members at risk to save as many civilians as we can. It’s a noble mission, and today we have seen firsthand how dangerous that mission is,” McKenzie said. “ISIS will not deter us from accomplishing the mission. I assure you of that.”
McKenzie said the attack on the airport gate was “followed by a number of ISIS gunmen who opened fire on civilians and military forces.”
ISIS’s claim of responsibility for the attacks comes after White House National Security adviser Jake Sullivan on Sunday said the U.S. was taking the threat of a potential ISIS attack in Afghanistan “absolutely deadly seriously.”
The American Embassy in Kabul on Wednesday warned citizens to avoid traveling to the airport unless they had received individual instructions from the U.S. government, and to stay away from specific gates, citing “security threats.”
McKenzie on Thursday said the threat from ISIS is “extremely real,” and that Defense officials “believe it is their desire to continue those attacks and we expect those attacks to continue and we’re doing everything we can to prepare for those attacks.”
World