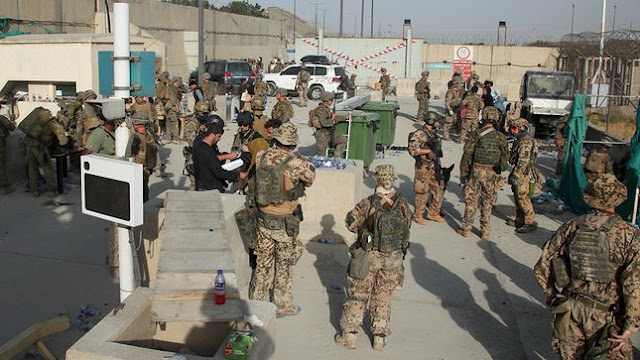 The remaining U.S. forces in Afghanistan are set to leave the country on Tuesday, marking an end to a nearly 20 year military engagement.
But the exit will not be a clean break for the Biden administration, which still must grapple with whether to continue evacuation missions for Americans and Afghan allies left behind, as well as the fallout from a deadly ISIS attack last week that killed more than a dozen U.S. service members.
Biden is facing calls from Republicans and even some Democrats to extend the military mission into September. Many Democrats have pushed Biden to do more to evacuate or help Afghan allies and refugees, while some GOP members have sought to drum up fears about who is being allowed into the U.S.
Lawmakers in both parties want Biden to ensure all Americans are out of Afghanistan.
The White House’s ability to finish the U.S. mission without any further casualties could define Biden’s first year in office, even as officials warn the final hours could be the most perilous for those on the ground.
“We should brace ourselves for more chaos and disorder,” said Nathan Sales, who led the State Department’s Counterterrorism Bureau during the Trump administration. “It’s very difficult to do an evacuation at the same time you're doing a military retrograde, and that’s essentially the situation we’re in now.”
White House officials have made clear the U.S. will end its military mission on Tuesday, and that the timeline has not changed despite the suicide bombing on Thursday outside the airport in Kabul.
“The next few days of this mission will be the most dangerous period to date,” White House press secretary Jen Psaki said in a statement on Friday.
The U.S. conducted a strike against an ISIS-K planner late Friday, which was the first known military action against the  group since the deadly bombing that ISIS-K militants have claimed responsibility for.
Biden went to Delaware on Sunday to meet with the families of the servicemembers who died in the bombing and participated in the dignified transfer at Dover Air Force Base. Also on Sunday, all local Afghan staffers at the U.S. Embassy in Kabul reportedly had been successfully evacuated by the U.S.
The military is in the final phase of the withdrawal, meaning commanders are moving troops into position to depart the country, as well as destroying equipment and positioning hardware to be taken out of Afghanistan.
But even as the military mission draws to a close in the coming hours, much of the attention will be on getting Americans out safely, as well as Afghans who assisted in the war effort over the last two decades.
The Department of Homeland Security is leading efforts to vet and resettle Afghan refugees, a point of concern for some Republicans who have attempted to paint the massive relocation effort as a national security concern.
Biden has vowed that any American who wants to come home from Afghanistan will be brought home. But Psaki said on Friday the U.S. is “not guaranteeing” that all visa holders and other at-risk Afghan civilians will be evacuated by the deadline.
U.S. personnel will likely have to gameplan for how to get U.S. citizens out of the country after the military drawdown is complete, adding yet another complex layer to an already chaotic situation.
The State Department said Sunday that there are up to 250 Americans still in Afghanistan who have indicated they are trying to get out, in addition to roughly 280 others who have yet to decide whether they want to leave the country or intend to stay.
Evacuation flights are expected to stop before the full military drawdown is complete. U.S. flights took nearly 3,000 people out of Afghanistan from early Saturday morning into early Sunday morning, bringing the total since the end of July to roughly 120,000 evacuees.
Some U.S. allies stopped their evacuation efforts shortly after Thursday’s attack. The United Kingdom announced it would cease operations, and only the individuals already inside the Kabul airport would be flown out. Germany on Thursday announced that its military had left Kabul.
Biden was under growing pressure to extend the Aug. 31 deadline even before Thursday’s deadly attack.
Reps. Seth Moulton (D-Mass.) and Peter Meijer (R-Mich.), who are both military veterans, traveled to Afghanistan this month in an effort to urge the president to extend the deadline and said after the visit “it is obvious” everyone won’t be out of Afghanistan by the 20th anniversary of the Sept. 11, 2001, attacks, let alone the end of August.
Another Democrat, Rep. Susan Wild (Pa.) led a bipartisan letter that called on Biden to extend the military operation beyond Aug. 31 and start discussions with NATO about handing over the Kabul airport to a NATO force to continue evacuating Afghans.
Wild, in one of the more blunt statements from a member of Biden’s own party, said the evacuation process “appears to have been egregiously mishandled.”
But Biden, in speech after speech over the last few months, has made clear he was not willing to commit to keeping troops in Afghanistan. He said Thursday at the airport attack that he stands behind his decision to withdraw from the country.
Psaki declined to directly respond to Wild’s criticism during a Friday briefing, but acknowledged the decision-making process and the deaths of 13 service members has weighed heavily on the president and White House officials.
“I don’t have any direct response to any member of Congress, but what I will say is it is easy to throw stones or be a critic from the outside. It is harder to be in the arena and make difficult decisions. And the decisions a commander-in-chief has to make include among difficult options, right? These were the options.”
National World