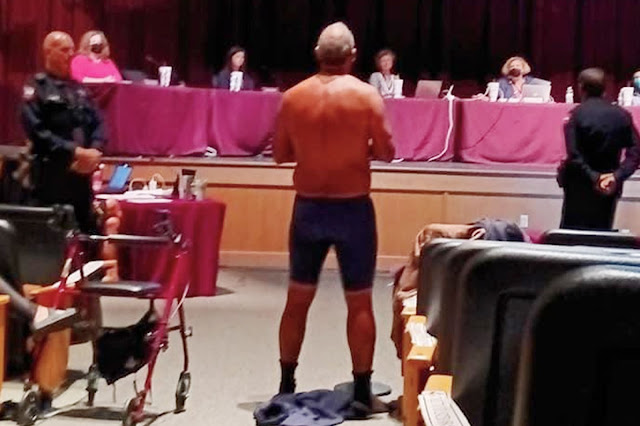 A Texas parent on Monday took off his clothing during a school board meeting to make a point regarding social norms and the need for mask mandates.
James Akers spoke at the Dripping Springs Independent School District Board meeting on Monday, telling the board that he has been a resident of the Central Texas town for 15 years, has sent three children through the school district and still has one more in high school.
As KVUE reported, the Dripping Springs Independent School District decided it would be making masks optional for the 2021-2022 academic year to comply with Gov. Greg Abbott's (R-Texas) ban on mask mandates. Dripping Springs is a rural town roughly 30 miles west of Austin, Texas.
"I'm here to say that I do not like government or any other entity — just ask my wife — telling me what to do, but sometimes I got to push the envelope a little bit. And I just decided that I'm going to not just talk about it but I'm going to walk the walk," said Akers, who himself appeared to have been masked.
"At work, they made me wear this jacket. I hate it. They make me wear this shirt and tie. I hate it," Akers said as he began removing those respective clothing items.
Appearing to speak facetiously, Akers removed his shirt as he continued, "On the way over here, I ran three stop signs and four red lights, almost killed somebody out there, but by God it's my roads too so I have every right to drive as fast as I want to, to make the turn that I want to."
"I got over here to the school today and the parking lot's full and I decided I was going to park wherever the hell I want to, which in this case happened to be a handicap," he added, removing his pants and eliciting a round of cheers from the audience.
"It's simple protocol people. We follow certain rules for a very good reason," Akers stated.
At this point, a school board member said to him, "Mr Akers, I understand — I believe you're a swimmer, but if you would mind putting your pants back on for comments, that would be appreciated."
Akers then partially redressed and left the podium.
Speaking to KRON-TV, Akers explained that his decision to strip down at the school board meeting began as a joke with his friend.
"There's too many voices out there that I think are digging in for political reasons and absolutely just not thinking about the common sense decisions we make every day to comply with everything," Akers told the station.
"From driving down the road and being safe and courteous to other drivers, to not parking in handicapped spots — all these rules that we're given every day that we follow because they make sense and we know in ourselves that it makes sense for the community."
"It's an easy message," he added.
Numerous school districts in Texas have decided to issue mask mandates for their students and teachers in direct defiance of Abbott's ban on mask mandates.
This fight between the state government and local school district has become a contentious legal battle, with a judge ruling on Wednesday that he cannot enforce a ban on mask mandates. Judge Tonya Parker issued a temporary injunction on Abbott's ban, ruling that the policy violated counties' abilities to reduce the spread of COVID-19.
However, on Thursday, the Texas Supreme Court sided with Abbott's decision to issue such a ban, writing in its ruling that "the status quo, for many months, has been gubernatorial oversight of such decisions at both the state and local levels.”
“That status quo should remain in place while the court of appeals, and potentially this Court, examine the parties’ merits arguments to determine whether plaintiffs have demonstrated a probable right to the relief sought,” the court added.
Texas