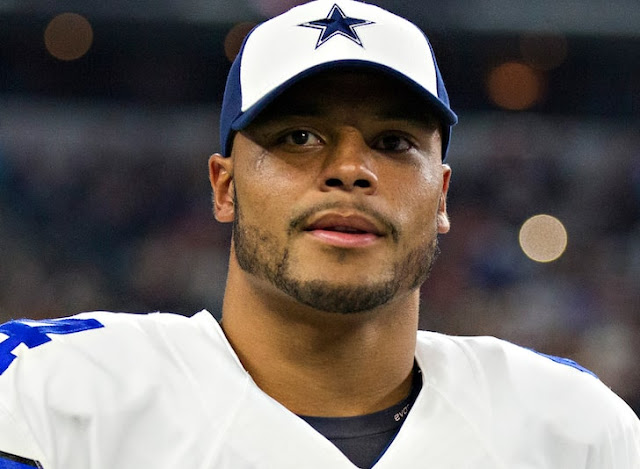 Cooper Rush won the Cowboys’ backup quarterback job over Garrett Gilbert and Ben “Uncle Rico” DiNucci, whose unshakeable confidence that he could throw it over that mountain over there was, indeed, impressive. Also unjustified. As our David Moore put it, Rush didn’t win this competition, he survived it. Not good enough when the NFC East is ripe for the picking.
Not when your $160 million quarterback hasn’t played a down in 10 months and is coming off not one but two injuries.
The Cowboys need a better insurance policy than what they’ve bundled. Or bungled.
Cam Newton, anyone? Nick Foles could be available, too. The Cowboys already missed on Gardner Minshew, who went to the Eagles for a conditional sixth-round pick. Minshew’s mustache is worth a sixth. He was pretty good for fairly awful Jacksonville teams and now offers an alternative in Philadelphia, and not just if Jalen Hurts gets hurt, either.
The Joneses missed one opportunity. They can’t nap through the next.
Normally, your intrepid pundit wouldn’t make a big deal about finding another backup quarterback. This is the stuff fans love to fret about. What many don’t seem to realize is that there aren’t enough decent quarterbacks to go around as starters, much less as backups, too. A story as rich as Foles rolling off the bench to lead his team to a Lombardi Trophy is fairy tale fodder. Even now, I’m not so sure he actually did it, given that he’s 2-9 as a starter since.
What Foles has demonstrated is that, if not really a starter, he’s a terrific reliever.
And until we get a better idea of where Dak is at, the Cowboys could use one of those, probably.
Consider a little history: Over the course of his rollicking ownership, Jerry Jones has been all over the map with backups. He’s gone big (Vinny Testaverde, Andy Dalton, Kyle Orton) and cheap (just about everyone else). He doesn’t like spending money on someone who won’t do anything but enjoy the view from the sideline.
Which is what made it interesting that he signed Dalton last year. There was no reason to think it necessary. Dak had been the league’s most durable quarterback, at least until a particularly gruesome injury in October.
Pressed into service with Dak’s season over, Dalton wasn’t great, as his 4-5 record will attest. But he wasn’t awful, either. Considering he had to battle COVID and a concussion and the fallout of a historically bad defense, he did about as well as could have been expected.
Had Dalton remained healthy, and the defense not been so awful, the Cowboys would have been a playoff team. You can argue that it wouldn’t have meant much. They’d have been a quick exit, and they wouldn’t have Micah Parsons, now looming as the biggest star in Dan Quinn’s reupholstered defense.
But let’s say Dak wouldn’t have suffered a season-ending injury. Maybe just four or five games. In most cases, that’s all you can expect of a backup. Dalton might have been good enough to keep the Cowboys in the middle lane until Dak returned.
The Cowboys’ current predicament is based on two miscalculations: They thought Dak would be completely recovered, and they figured Gilbert’s start against Pittsburgh last season was evidence that he’s good enough.
Frankly, I thought Gilbert would have been an adequate backup, too. But his play in fake games proved otherwise. That’s the thing about the preseason. There’s more to be gained than just loosening up the swing tackle.
Everybody needs a few reps going into the regular season. Even the GOAT. Tom Brady played a couple series last weekend. Patrick Mahomes, too. When Kevin Stefanski was asked why Baker Mayfield started against the Falcons the other night, the reigning coach of the year essentially said it was important to take care of the little things, because they add up.
Dak needed a couple or three series against Jacksonville to shake off the dust, if nothing else. Instead, he’ll go cold into the opener against the defending world champs.
Maybe we’re making too much of this. Maybe Dak’s completely recovered from his ankle and shoulder injuries. But, if that’s so, why didn’t he play a down in the preseason? Are the Cowboys being overly cautious? Or is there something they aren’t telling us?
Whatever the situation might be, they need a backup who could carry them a bit with so many questions about Dak and so much on the line. Would Cam Newton be the answer? True, he hasn’t done much since he led a team to a Super Bowl, and you can certainly question his judgment. Because he isn’t vaccinated, he’d have to jump through hoops just to enter The Star next week.
Of course, maybe Cam wouldn’t want a backup job, and it’s why he’s not playing for Bill Belichick anymore. What, then, would the Bears want for Foles? Make a call to the Raiders about Marcus Mariota. Get busy, Joneses. Nap time is over.
Sports