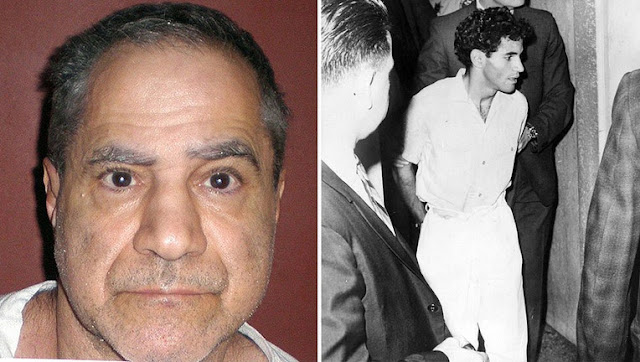 The assassin of Robert F. Kennedy on Friday was granted parole by a two-person panel, a major win for the 77-year-old man who received the support of two of the former senator’s sons, The Associated Press reported.
Sirhan Sirhan gunned down Kennedy, then a Democratic U.S. Senator from New York and brother of President John F. Kennedy, in 1968 at the Ambassador Hotel in Los Angeles moments after delivering a victory speech in the pivotal California primary. He was convicted of first-degree murder.
Sirhan, a Christian Palestinian from Jordan, has said he was angry at Kennedy for his support of Israel.
This was his 16th attempt at parole.
"I would never put myself in jeopardy again," he told the parole board from a San Diego County prison where he appeared for the virtual proceeding. "You have my pledge. I will always look to safety and peace and non-violence."
The decision by the two-member board doesn't assure his release. It will next go up for a review and will require the governor's approval to be official.
Douglas Kennedy, who was a toddler when his father was killed, said he was moved to tears by Sirhan’s remorse and he should be released if he’s not a threat to others.
"I’m overwhelmed just by being able to view Mr. Sirhan face to face," he said. "I think I’ve lived my life both in fear of him and his name in one way or another. And I am grateful today to see him as a human being worthy of compassion and love."
Some Kennedy family members, Los Angeles law enforcement officers and members of the public submitted letters opposing Sirhan's release, Parole Board Commissioner Robert Barton said at the start of the proceeding.
Los Angeles County District Attorney George Gascon, who is facing a recall effort of his progressive reform policies, has said he idolized Kennedy but did not send any prosecutors to the hearing as part of a promise not to influence such proceedings.
"We don’t have a DA here, but I have to consider all sides," Barton said.
Sirhan’s defense attorney, Angela Berry, argued that the board’s decision should be based on who her client is today and not about past events, which is what the board has based its parole denials on before. She said she plans to focus on his exemplary record in prison and show that he poses no danger.
"We can’t change the past, but he was not sentenced to life without the possibility of parole," Berry told The Associated Press on Thursday. "To justify denying it based on the gravity of the crime and the fact that it disenfranchised millions of Americans is ignoring the rehabilitation that has occurred and that rehabilitation is a more relevant indicator of whether or not a person is still a risk to society."
If released, Sirhan could be deported to Jordan. That raised concerns for Barton, who said he feared he could be a lightning rod for more violence. Sirhan said he was too old to get involved in the Middle East conflict.
"The same argument can be said or made that I can be a peacemaker, and a contributor to a friendly nonviolent way of resolving the issue," Sirhan said.
National