Afghan interpreter who helped rescue Biden, other senators in 2008 asks president to save him 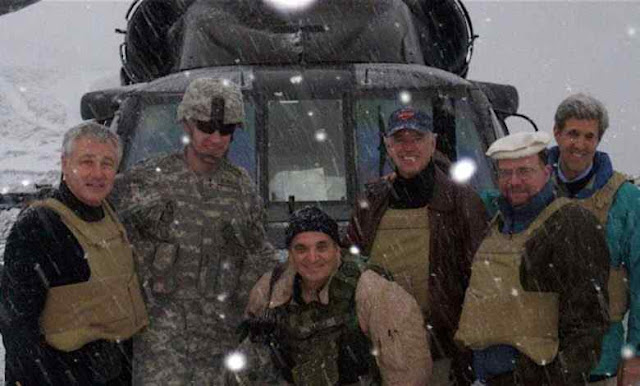 An Afghan interpreter who helped save President Biden when he was a U.S. senator stranded in Afghanistan 13 years ago made an appeal for help in escaping Afghanistan with his family in an interview with The Wall Street Journal published on Tuesday.
In 2008, the interpreter named only as Mohammed helped in extracting Biden, then a senator from Delaware, along with then-Sens. John Kerry (D-Mass.) and Chuck Hagel (R-Neb.), when the Black Hawk helicopters they were in were forced to make emergency landings due to extreme blizzard conditions 20 miles away from Bagram Air Base.
Mohammed was a part of the team sent out from Bagram that drove for several hours into the mountains to reach the visiting U.S. lawmakers.
“Hello Mr. President: Save me and my family,” Mohammed said to the Journal on Monday. “Don’t forget me here.”
When reached for comment by the media, the White House said it was unable to comment on individual cases.
A White House representative pointed to remarks from Secretary of State Antony Blinken this week in which he said the U.S. will continue to help Afghan allies and hold the Taliban to its pledge of allowing people to travel out of Afghanistan.
According to the Journal, Mohammed and his four children are currently in hiding from the Taliban as his years-long attempts to leave the country have been stymied by bureaucratic processes.
“I can’t leave my house,” Mohammed said. “I’m very scared.”
After Kabul fell to the Taliban, he had attempted to make it to the airport. However, Mohammed told the Journal that U.S. forces informed him that only he could get past the gates, not his family.
Numerous U.S. military officials have signaled their support for Mohammed, the Journal noted.
In a letter supporting Mohammed's Special Immigrant Visa application, Lt. Col. Andrew R. Till wrote, “His selfless service to our military men and women is just the kind of service I wish more Americans displayed."
Army combat veteran Shawn O'Brien wrote, "If you can only help one Afghan, choose [Mohammed]."
The last U.S. military plane left Afghanistan on Monday, ending the nearly 20-year war. However, officials have said that diplomatic efforts to evacuate Americans and vulnerable Afghans will continue.
After overtaking the Afghan government, the Taliban said they would offer amnesty to all Afghans who worked with Western-backed forces. However, reports have come out of Taliban fighters seeking such individuals and threatening their families.
World