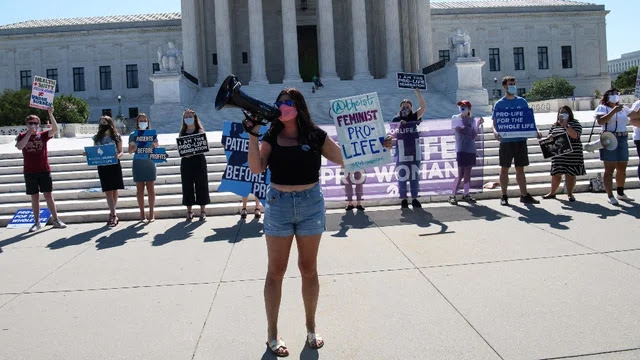 A group of abortion providers asked the Supreme Court on Monday to block a Texas law that would ban virtually all abortions after a fetal heartbeat is detected.
The law, which authorizes citizens to sue those who perform or “aid” abortions after the roughly six-week ban is triggered, is set to take effect this week.
“Nearly fifty years ago, this Court held that Texas could not ban abortion prior to viability,” the group wrote in a court brief, referring to the 1973 landmark decision in Roe v. Wade. “Yet, absent intervention from this Court, in less than two days, on Wednesday, September 1, Texas will do precisely that.”
The request was filed to Justice Samuel Alito, who handles emergency matters arising from Texas.
The Texas measure is among a number of abortion restrictions that state legislatures have passed in recent years that pose a direct challenge to Roe v. Wade, which prohibits states from banning abortion before fetal viability, typically around 24 weeks.
Signed into law in May by Gov. Greg Abbott (R), Texas’s S.B. 8 prohibits abortions after the presence of a fetal heartbeat is detected, which can occur as early as six weeks after a woman becomes pregnant, and only makes exceptions for medical emergencies.
Federal courts have blocked similar bills passed in other states, including North Dakota, Iowa, Kentucky and Mississippi.
What sets the Texas bill apart, however, is that it prohibits public officials from enforcing it in an apparent effort to sidestep legal challenges. Instead, the law deputizes members of the public to sue abortion providers and those who “aid or abet” the procedure after the ban is triggered around six weeks.
The group of abortion providers, who initially sued over the measure in July, have been unable to block it ahead of its effective date, prompting their emergency application to the Supreme Court.
The justices are slated to take on a separate challenge to Roe v. Wade next term when they review a Mississippi restriction that bans abortions after 15 weeks, with only narrow exceptions.
Texas