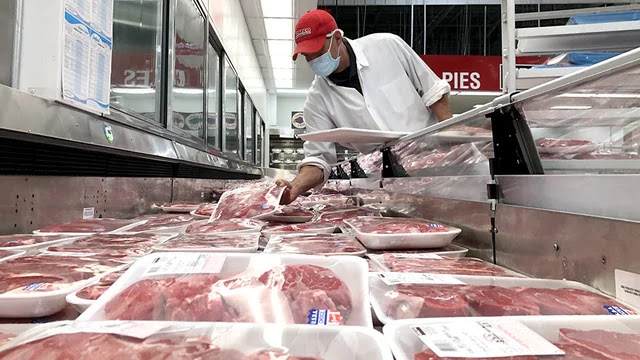 The Biden administration announced Tuesday it will issue new rules for defining when meat can be labeled a "product of USA" in an effort to boost American farmers.
President Biden plans to issue an executive order directing the U.S. Department of Agriculture (USDA) to release new rules “so that consumers have accurate and transparent labels that enable them to know where their food comes from and to choose to support American farmers and ranchers,” White House press secretary Jen Psaki said.
“Something I learned that I found a little outrageous — we’ll see what you all think — is that under current labeling rules, most grass-feed beef labeled ‘product of USA’ is actually raised and slaughtered abroad and then imported to the U.S. for processing,” Psaki told reporters.
“The president and the USDA believe it is unfair for domestic farmers and ranchers to have to compete with foreign companies that are misleading consumers,” she added.
The executive order will also direct the USDA to develop a plan to increase farmers' access to markets, including developing another standard for labeling that would allow consumers to know when buying products if its producer treats workers fairly.
The president’s executive order will seek to increase opportunities for small businesses and options for consumers by boosting farmers’ and ranchers’ earnings, fighting back against abuses of agribusiness corporations and giving farmers the right to repair their own equipment how they like.
It aims to follow through on Biden campaign promises such as stopping chicken processors from exploiting and underpaying chicken farmers and adopting anti-retaliation protections for farmers who speak out, Psaki added.
National