What we know so far about the $3.5 trillion budget deal 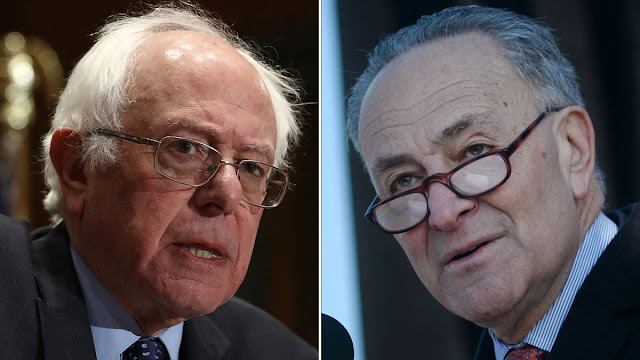 Top Senate Democrats on Wednesday pitched their colleagues on a $3.5 trillion budget resolution that would pave the way to pass a wide-ranging spending package without any Republican votes.
Senate Majority Leader Charles Schumer (D-N.Y.), Senate Budget Committee Chairman Bernie Sanders (I-Vt.) and Sen. Mark Warner (D-Va.), a key moderate, presented the proposal to the Democratic Caucus.
Senate Democrats still need to hammer out some of the details, and legislative text has yet to be released. They also need to get all 50 members of their caucus on board with the proposal for it to pass without GOP support.
Schumer has said he wants the Senate to pass a budget resolution before the August recess, as well as on a bipartisan infrastructure measure that would include $579 billion in new spending.
Here’s what we know so far about the $3.5 trillion budget agreement.
It reflects Biden’s proposals aimed at helping families
The budget proposal would give Democrats the ability to pursue many of the social spending programs that President Biden outlined earlier this year in his $1.8 trillion American Families Plan.
It would support spending on items such as universal pre-K, paid family and medical leave and nutrition assistance, according to a senior Democratic aide.
The measure also would allow Democrats to seek extensions of tax-credit expansions established by the $1.9 trillion coronavirus relief law that Biden enacted in March, the aide said. The relief law expanded three tax credits that benefit low- and middle-income households: the child tax credit, the earned income tax credit and the child and dependent care tax credit.
The aide said the duration of those extensions and the spending programs would depend on their cost, as well as feedback from congressional committees. Many Democratic lawmakers want to make the child tax credit expansion permanent, though the cost of doing so is a significant obstacle.
Climate change is a major component
The budget framework would allow Democrats to pursue spending that aims to meet Biden’s goals of 80 percent clean electricity and a 50-percent reduction in carbon emissions by 2030, the aide said.
The deal calls for funding clean-energy tax incentives, federal procurement of clean energy technologies and a clean-energy accelerator.
It also calls for funding for a “Civilian Climate Corps,” which would create conservation jobs. Sanders told reporters Wednesday that this program is included in the deal “so that a young generation can earn decent wages and get educational benefits in leading the effort to combat climate change.”
The climate-focused programs are in line with ideas that Biden proposed earlier this year in his $2.3 trillion American Jobs Plan but were not included in the framework for a $1.2 trillion bipartisan infrastructure package.
The budget deal also would allow Democrats to pursue other aspects of the jobs plan in a reconciliation bill, including spending on research and development and workforce development and worker protections, the aide said.
It aims to reduce Americans’ health care costs
The budget deal would facilitate Democrats including a number provisions in a reconciliation bill, allowing Democrats to sidestep a GOP filibuster, that are designed to lower health care costs.
It would pave the way for Democrats to pursue adding dental, vision and hearing coverage to Medicare, a top priority for many progressives.
It also would allow Democrats to bolster expanded ObamaCare subsidies, expand Medicaid in states that have not already done so and lower patient spending on prescription drugs, the senior Democratic aide said.
The length of health care programs would depend on their cost and input from congressional committees, the aide added.
Wealthy Americans, corporations would face tax increases
The budget deal would direct Congress to enact provisions to finance the new spending.
Much of the spending would be offset through tax increases on corporations and high-income individuals, as well as by strengthening tax enforcement.
The budget deal also calls for spending to be offset through savings to the federal government from lower prescription-drug prices. Additionally, the budget deal calls for offsetting some of the cost of new spending through increased long-term economic growth, the aide said.
The framework would bar the reconciliation bill from including tax increases on individuals making under $400,000 annually, the aide said, reflecting a pledge Biden first made on the campaign trail.
It also would prohibit tax increases on small business and family farms. Some Democrats from agriculture-heavy areas have raised concerns that Biden’s proposal to tax capital gains at death would impact those groups.
National