US to evacuate Afghans who assisted US military 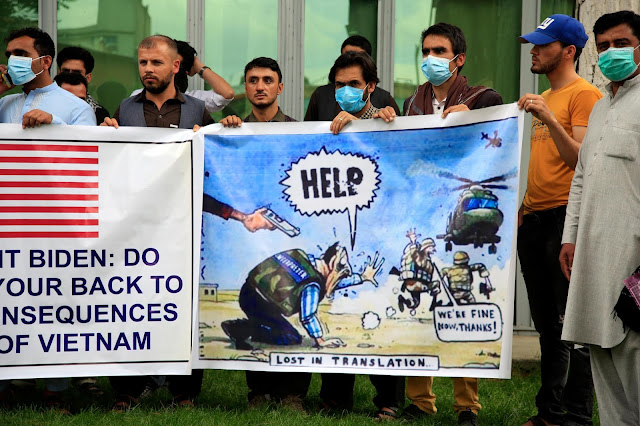 The United States is formally launching “Operation Allies Refuge” to evacuate Afghans who helped U.S. troops during the 20-year war and are facing threats to their lives from the Taliban, the Biden administration announced Wednesday.
Flights out of Afghanistan for those who are already in the process of obtaining special immigrant visas (SIVs) will start in the last week of July, a senior administration official said in a statement.
No further details on when the evacuations will start will be released, the statement said, citing “operational security.” Officials also did not say where the Afghans would be sent.
“At President Biden’s direction, the United States is launching Operation Allies Refuge to support relocation flights for interested and eligible Afghan nationals and their families who have supported the United States and our partners in Afghanistan and are in the SIV application pipeline,” the official said.
“As the President made clear, the United States remains confident that Afghanistan’s Armed Forces have the tools and capability to defend their country and that the conflict will ultimately have to be resolved at the negotiating table,” the official added.
The Biden administration has faced increasing pressure from lawmakers and advocates to evacuate Afghans who served as interpreters or otherwise helped the U.S. military during the war as the United States nears its final exit from Afghanistan.
The withdrawal is about 95 percent done, U.S. Central Command said this week. One of the last major steps in the withdrawal happened Monday when Gen. Scott Miller, who was the top U.S. commander in Afghanistan, left his command.
Amid the withdrawal, the Taliban have racked up battlefield successes, seizing several key border crossings and sweeping through the north.
Amid fears Taliban could overrun the country, lawmakers and others have been sounding the alarm about delays in the SIV program, which Congress created to allow Afghans who helped the U.S. government during the war to come to the United States.
An estimated 18,000 applicants are already awaiting visas, with an estimated 53,000 family members seeking to accompany them. The application process can take as long as 800 days.
The Biden administration said last month it would evacuate Afghans who are waiting for their SIV applications to be processed, but offered few other details of its plan.
Last week, President Biden also pledged to start evacuating Afghan allies by the end of the month, but again offered few other details.
“Our message to those women and men is clear: There is a home for you in the United States, if you so choose,” Biden said in an address defending his order to withdraw. “We will stand with you, just as you stood with us.”
On Wednesday, the senior administration official said Tracey Jacobson, a former U.S. ambassador to Tajikistan, Turkmenistan and Kosovo, is leading a State Department coordination unit to run Operation Allies Refuge. The unit also includes representatives from the departments of Defense and Homeland Security.
Deputy Homeland Security Advisor Russ Travers is also coordinating the interagency policy process on Operation Allies Refuge, the official said.
Wednesday’s statement does not elaborate on key details of the plan, such as how many people will be evacuated or where they will go.
The Biden administration has said it is looking at U.S. facilities outside the continental United States and third countries as options for the evacuees, with the Pentagon saying it is working to identify installations that could house the Afghans.
“We are committed to doing our part and helping meet our obligation to these men and women and their families, and the locus of that effort right now is on identifying locations overseas that would serve as appropriate, temporary residences for these individuals as they complete the process,” Pentagon press secretary John Kirby told reporters Tuesday.
State Department-chartered aircraft, rather than U.S. military aircraft, is the “preferred option” for transportation for the evacuations, Kirby added.
Lawmakers and advocates have been pushing for the Afghans to be sent to Guam, citing the historical precedent of sending south Vietnamese refugees there during the fall of Saigon in 1975. Additionally, advocates say, using a U.S. territory would allow the Afghans to have legal protections they wouldn’t have in a third country, such as being able to apply for asylum if their SIV applications are denied.
But the administration has reportedly asked three Central Asian countries near Afghanistan – Kazakhstan, Tajikistan and Uzbekistan – to take in the evacuees while they wait for their visas to be processed.
Homeland Security Adviser Elizabeth Sherwood-Randall is leading a U.S. delegation to Uzbekistan this week to “discuss opportunities to bolster regional economic development, enhance stability, and strengthen American partnerships,” national security council spokesperson Emily Hornes said in a statement earlier Wednesday.
Zalmay Khalilzad, the top U.S. envoy for the Afghan peace process, is part of the delegation and will meet with Afghan President Ashraf Ghani and other leaders to “ discuss how to promote peace, security and development in Afghanistan, and advance shared regional security interests, including counterterrorism cooperation,” the statement added.
World