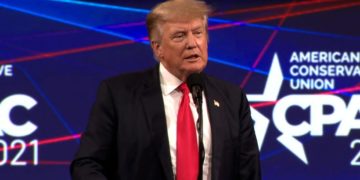 Former President Trump and Florida Gov. Ron DeSantis (R) led the pack in the Conservative Political Action Conference’s (CPAC) straw poll for the 2024 GOP presidential nominee.
Trump held a commanding lead, with 70 percent of those who responded to the survey saying they would vote for him in the Republican primary if it were held today. DeSantis came in second with 21 percent.
But when polling the 2024 Republican primary ballot without Trump, DeSantis led the pack with 68 percent of the vote.
Sen. Rand Paul (R-Ky.), former U.S. Ambassador to the United Nations Nikki Haley, Sen. Ted Cruz (R-Texas), Fox News host Tucker Carlson, South Dakota Gov. Kristi Noem (R) and former Secretary of State Mike Pompeo (R) all received 1 percent in the poll that included Trump.
In the survey that left off Trump, Pompeo came in second at 5 percent, and Donald Trump Jr., the former president’s son, came in third with 4 percent.
Former Vice President Mike Pence clocked in at zero percent.
The results from the regional CPAC convention come after DeSantis ran narrowly ahead of former President Trump in a poll of potential 2024 candidates conducted last month at the Western Conservative Summit in Denver.
That survey found that 74.12 percent of respondents said they would approve of DeSantis for president in three years, compared with 71.43 percent who said the same of Trump.
The Florida governor won 275 votes, while the former president received 265.
A straw poll from the annual CPAC in February, showed Trump with 55 percent of the vote, followed by DeSantis at 21 percent and Noem at 4 percent. Without Trump in the mix, DeSantis received 43 percent of the vote.
Trump earlier this month told Fox News host Sean Hannity that he has made a decision on if he will run for president again in 2024 but has not yet made that determination public.
“You are not going to answer, but I have to ask, where are you in the process?” Hannity asked Trump, referring to his decision on whether to mount another White House bid.
“Let me ask you this, without giving the answer, what the answer is, have you made up your mind?” Hannity asked.
“Yes,” Trump responded.
In May, Trump said he would “certainly” consider DeSantis as his running mate should he throw his hat in the ring again in 2024.
National