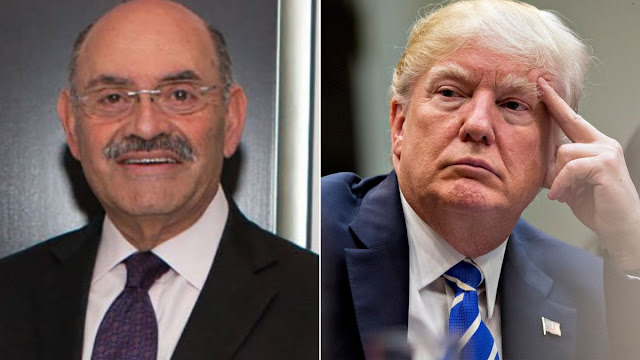 The Trump Organization's longtime chief financial officer (CFO) Allen Weisselberg on Thursday surrendered to the Manhattan district attorney's office following reports that a grand jury filed criminal indictments against the executive and the organization for tax-related charges, according to multiple sources.
A spokesperson for the Trump Organization indicated that the charges relate to employee benefits, and sources told The Washington Post on Wednesday that they involve allegations of unpaid taxes on benefits. The exact charges against the longtime CFO are expected to be revealed later in the day.
Weisselberg, who has worked for Trump for decades and kept his books since the 1980s, was accompanied by his lawyer Mary E. Mulligan when he turned himself in at about 6:20 a.m., according to The New York Times. He is expected to be arraigned in the afternoon along with other company representatives.
A spokesperson for the Trump Organization blasted the office of Manhattan District Attorney Cyrus Vance Jr. (D) in a statement, arguing he "is bringing a criminal prosecution involving employee benefits that neither the IRS nor any other District Attorney would ever think of bringing. This is not justice; this is politics."
"Allen Weisselberg is a loving and devoted husband, father and grandfather who has worked at the Trump Organization for 48 years. He is now being used by the Manhattan District Attorney as a pawn in a scorched earth attempt to harm the former President," the spokesperson asserted.
The Hill reached out to Weisselberg’s attorney for comment.
Prosecutors previously tried to persuade Weisselberg to cooperate with the investigation, but his lawyers recently said he would not be of assistance, CNN reported, citing people familiar with the matter.
The news of Weisselberg surrendering to authorities comes after The Wall Street Journal reported Wednesday that the Manhattan district attorney’s office was set to charge the longtime executive and the Trump Organization with tax-related crimes the next day.
The Washington Post also reported that a Manhattan grand jury had filed criminal indictments against Weisselberg and the organization.
Weisselberg is the subject of a criminal tax investigation by Vance's office. Prosecutors are reportedly looking into whether benefits given to Weisselberg and other executives appeared in the company’s financial record-keeping system and if the company paid taxes on those benefits.
The benefits are set to include car leases, apartment rent and private school tuition totaling thousands of dollars.
Former President Trump is not expected to be charged when the indictment is unsealed later Thursday. Ronald Fischetti, an attorney representing Trump, said in an interview on Monday that Vance’s office told him it is currently only considering charges against the Trump Organization and individual employees for allegedly not paying taxes on company benefits.
He said there are no charges related to hush money allegations or potential fraud regarding property valuations.
New York Attorney General Letitia James (D) is also investigating the Trump Organization. Her office announced last month that it was investigating the organization in a "criminal capacity," in addition to a "civil capacity."
National