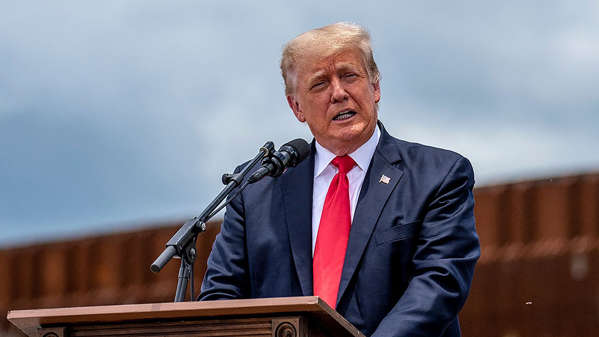 Former President Trump is leading a class-action lawsuit against Facebook, Twitter and Google, as well as their CEOs, over allegations of censorship after the companies took action to ban and suspend his accounts.
“Our case will prove this censorship is unlawful, it's unconstitutional and it's completely un-American,” Trump said Wednesday from his golf club in Bedminster, N.J.
The legal action comes after the former president was permanently banned from Twitter and suspended from Facebook for at least two years over posts made in response to the Jan. 6 riot at the Capitol.
Spokespeople for Twitter and Facebook declined to comment. A spokesperson for Google did not immediately respond to a request for comment.
The lawsuit was filed in the U.S. District Court of the Southern District of Florida.
Trump said it will be the first of “numerous” other lawsuits aimed at holding "Big Tech" accountable.
The lawsuit is backed by the America First Policy Institute, a nonprofit focused on promoting the former president's policies.
The complaints argue the platforms have “increasingly engaged in impermissible censorship resulting from threatened legislative action, a misguided reliance upon Section 230.”
Section 230 of the Communications Decency Act is a controversial provision that gives platforms a legal liability shield over content posted on their platform by third parties. Trump also sought to repeal Section 230 during his time in office.
Trump said Wednesday the lawsuit will aim to “at a very minimum” change the protections platforms have under Section 230, and “at a maximum” take it away.
The complaint argues the platforms threaten “potentially every citizen’s right to free speech.”
Similar GOP-led efforts to prohibit social media companies from enforcing their policies against politicians have been blocked by courts, most recently by a judge blocking a Florida law.
Tech industry groups have pushed back on such efforts.
Chamber of Progress, a tech group that lists Facebook and Twitter among its corporate partners, slammed Trump’s suit against the CEOs on Wednesday.
"Right-wing extremists are turning to the courts because their own platforms have collapsed after becoming anything-goes dumping grounds for hate, hoaxes, and pornography," said Chamber of Progress CEO Adam Kovacevich. "Now they want to turn Facebook and Twitter into another cesspool for extremism."
Paul Barrett, deputy director of the NYU Stern Center for Business and Human Rights, said Trump's lawsuit is “DOA” and that the former president “has the First Amendment argument exactly wrong.”
“The First Amendment applies to government censorship or speech regulation. It does not stop private sector corporations from regulating content on their platforms. In fact, Facebook and Twitter themselves have a First Amendment free speech right to determine what speech their platforms project and amplify—and that right includes excluding speakers who incite violence, as Trump did in connection with the January 6 Capitol insurrection,” Barrett said in a statement.
Barrett was co-author of a February report that determined there is a lack of evidence to support claims that social media companies are engaging in anti-conservative censorship.
The legal fight is playing out at the state level as well.
Two tech trade groups, NetChoice and the Computer and Communications Industry Association, recently sued Florida over a law that would have fined companies for kicking politicians off their platforms. The group argued the law was a violation of First Amendment rights.
The bill, which was signed into law by Republican Florida Gov. Ron DeSantis, was recently blocked by a judge who ruled that it was unconstitutional.
Texas lawmakers tried passing a similar bill in the state legislature, but it has not passed in the state House.
National