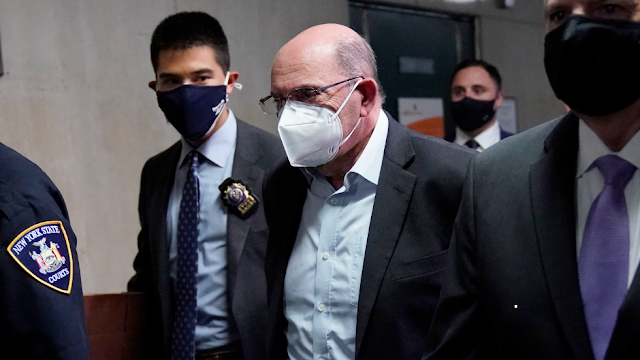 New York City prosecutors on Thursday charged the Trump Organization and its chief financial officer, Allen Weisselberg, with various fraud and conspiracy charges.
Weisselberg, who turned himself in earlier Thursday morning, pleaded not guilty to all 15 charges, which include tax fraud, conspiracy, grand larceny and falsifying business records. He and the Trump Organization have denied wrongdoing.
In an indictment that was unsealed Thursday afternoon, prosecutors alleged that Weisselberg helped orchestrate a scheme to compensate himself and “other Trump Organization executives” with unreported income.
According to prosecutors, Weisselberg avoided paying taxes on about $1.7 million in income between 2005 and 2017. The indictment alleges that the Trump Organization had been paying for his rent in a Manhattan apartment, living expenses, a relative’s private school tuition and the lease on a Mercedes.
Former President Trump was not mentioned in the charging documents but prosecutors suggested that executives other than Weisselberg were implicated in the scheme.
Carey Dunne, an attorney in the district attorney's office, said in court on Thursday that prosecutors found widespread wrongdoing within the company.
"As spelled out in the indictment, this was a fifteen year-long tax fraud scheme, involving off the books payments, which is a type of crime that's charged against companies and executives all the time," Dunne said. "Contrary to today's assertion by the company's former CEO this is not a 'standard practice in the business community,' nor was it the act of a rogue or isolated employee.
"Instead, it was orchestrated by the most senior executives, who were financially benefiting themselves and the company by getting secret pay raises at the expense of state and federal taxpayers."
The Trump Organization in a statement before the charges were unsealed dismissed the New York probe as a politically driven matter. Ron Fischetti, an attorney representing the company in the case, scoffed at the prosecutors’ case in a statement issued after the arraignment.
“After years of investigation and the collection of millions of documents and devoting the resources of dozens of prosecutors and outside consultants, this is all they have?” Fischetti said. “The District Attorney is supposed to be apolitical, but everyone knows that the only reason they are proceeding with this case is because it is ‘Trump’. As far as we are concerned, this case is over.”
Former President Trump responded to the news of the charges by calling it a "political witch hunt."
"The political Witch Hunt by the Radical Left Democrats, with New York now taking over the assignment, continues," Trump said. "It is dividing our Country like never before!"
Attorneys for Weisselberg did not immediately respond to a request for comment.
Weisselberg is the first Trump Organization official to be indicted in the long-running investigations by Manhattan District Attorney Cyrus Vance and New York attorney general Letitia James into the company’s financial dealings.
The charges come just months after Vance’s office obtained Trump’s tax returns and other financial records following a protracted legal battle that twice reached the Supreme Court.
Weisselberg was led past reporters and broadcast crews in handcuffs at a Manhattan courthouse on Thursday as he made his first appearance before a judge.
James in a statement called the charges unsealed Thursday “an important marker” in the ongoing investigation into Trump’s business dealings.
The charges are likely to turn up the pressure on Trump, especially if Weisselberg chooses to cooperate with prosecutors in the criminal probe, which the district attorney’s office says is ongoing.
Trump had said little about the case publicly this week as the anticipation built around charges being filed. He issued a lengthy statement on Monday decrying the New York investigations as politically motivated, seeking to muddy the waters ahead of any formal announcement.
Multiple sources in Trump’s orbit said there has been chatter among aides in recent days about the looming announcement of charges, but some were unsure of the seriousness given it would not directly implicate the former president.
National