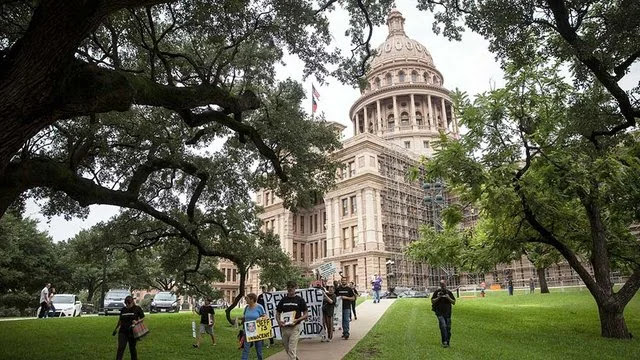 The GOP-led Texas state Senate passed sweeping elections legislation Tuesday that critics say will make it harder to vote, particularly for those of color, one day after Democratic lawmakers in the state House left Texas to thwart passage of the bill in the lower chamber.
The upper chamber voted along party lines to green-light the elections bill, according to the Texas State Tribune.
The passage comes a day after Texas Democrats in the lower chamber left Austin to head for Washington, D.C., to block consideration of the bill by denying their Republicans the quorum necessary for a special legislative session.
Among the proposals included in the legislation are measures pushing for new limits on early voting and curbside voting, a ban on round-the-clock voting centers and the end of straight-ticket voting.
The Democrats' move drew praise from supporters online as a number of Republican-led legislatures across the country continue to advance elections bills in recent months.
However, the demonstration has not gone without pushback from Republicans in the state, including from Texas Gov. Greg Abbott (R), who threatened arrests for the Democratic lawmakers upon their return to the state.
“If these people want to be hanging out wherever they're hanging out on this taxpayer-paid junket, they're going to have to be prepared to do it for well over a year,” the governor told local media on Monday.
“As soon as they come back in the state of Texas, they will be arrested, they will be cabined inside the Texas Capitol until they get their job done,” he continued.
The governor added that the Speaker of the state House would also be able to “issue a call to have these members arrested,” while vowing he “can and [will] continue to call a special session after special session after special session all the way up until election next year.”
Texas