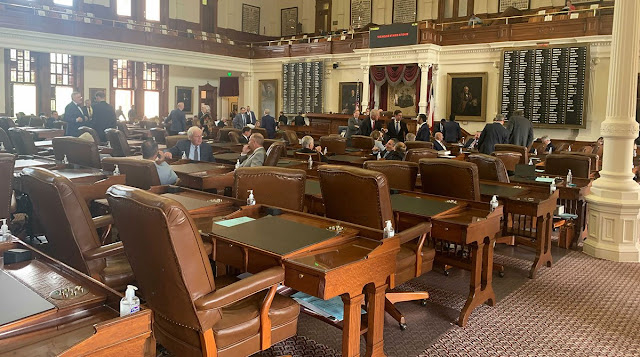 The Texas House voted Tuesday to have law enforcement track down Democratic lawmakers who fled the state to deny a quorum needed to pass a controversial elections bill, an escalation in the growing feud between the two parties over the legislation.
The chamber voted by a 76-4 margin to authorize law enforcement to return the Democrats to Austin after they flew to Washington, D.C., to prevent the elections bill from passing in a special legislative session.
The gambit left only 80 members present in the House. Of the 67 Democrats who serve in the chamber, only four were present. All four voted against the “call of the House.”
"Members, the sergeant-at-arms and the officers appointed by him are directed to send for all absentees whose attendance is not excused for the purpose of securing and maintaining their attendance — under warrant of arrest, if necessary," state House Speaker Dade Phelan (R) said after the vote.
It is not clear precisely how much power the vote has, given that Texas law enforcement lacks any jurisdiction to operate in Washington.
Texas Gov. Greg Abbott (R) has also threatened the Democrats with arrest upon their return to the Lone Star State.
Still, the Tuesday vote marks the latest salvo in the debate over the elections bill.
The legislation would implement limits on early voting, curbside voting and drop boxes; prohibit round-the-clock voting centers and voting facilities in outdoor structures like parking garages; and scrap straight-ticket voting, among other things.
While Republicans touted the bill as a needed measure to ensure election security — despite no evidence emerging of widespread irregularities or wrongdoing in the 2020 cycle — Democrats panned the effort as voter suppression.
Democratic lawmakers earlier this year walked out of the legislature to prevent the bill from passing, sparking Abbott to call a special session this month to try to greenlight the legislation. Democrats on Monday again denied a quorum by taking a charter flight to D.C.
“I'm not going to be a hostage that my constituents' rights might be stripped from them. We have fought too long and too hard in this country,” state Rep. Senfronia Thompson (D) said outside the Capitol Tuesday.
Texas