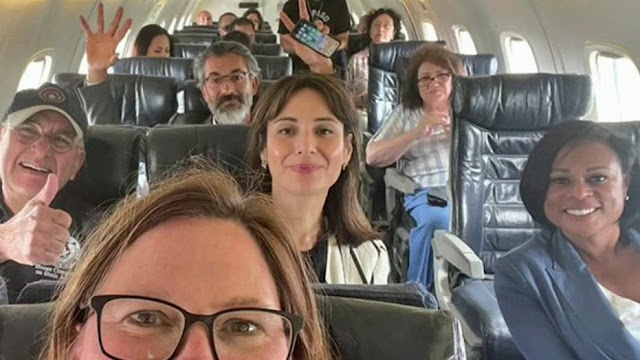 Democratic lawmakers from Texas have staged one of the most catastrophic publicity stunts of all time.
In a quest to block the passage of a GOP-approved voting procedures bill, 51 Democratic legislators from Texas flew to Washington, D.C., aboard two chartered jets, posting selfies online showing the group elated, celebratory and also mask-less.
Soon after their arrival, several tested positive for COVID-19 despite, they claim, being fully vaccinated. Talk about a messaging disaster. Naturally, people are asking how so many people – it is now six of the fleeing Democrats – can come down with the coronavirus if they have already been vaccinated.
Other stories in the news compound the confusion. Yankees players seem to be dropping off the roster like flies because they’ve tested positive for the virus; most of them reportedly have been vaccinated, too.
In the UK, a nation with one of the highest vaccination rates, there has been a huge surge in infections. Some 88 percent of Brits have received at least one shot; 69 percent have taken two.
And – breaking news – staffers to House Speaker Nancy Pelosi (D-Calif.) and in the White House have tested positive for COVID-19; they, too, are reportedly fully vaccinated.
What gives? Why isn’t the Centers for Disease Control and Infection (CDC) or the Biden White House making sense of this? Biden talks about the pandemic being only “among the unvaccinated,” but it appears the vaccinated are vulnerable, too.
Instead of explaining the conflicting trends, Biden accused Facebook of “killing people” because the social media giant hasn’t managed to stomp out all vaccine “misinformation.” (Biden later backed off that comment.) Isn’t it reasonable to voice some skepticism about the vaccine if people are still getting sick?
We should all sympathize with anyone who is infected by the virus and hope they recover quickly. But given the left’s politicization of the pandemic, it is amusing to find these self-congratulatory super-spreader Texans in a pickle.
Perhaps nothing is more important to Joe Biden’s presidency than the success of the vaccine. He did not oversee, inspire or even applaud the creation of the vaccines — that was the job of President Trump’s Operation Warp Speed.
In fact, people in his administration threw shade on the inoculations. Vice President Kamala Harris said she would not trust “Trump’s vaccine.” Little did she know that months later her boss’s credibility would rest on dispelling the “hesitancy” sewn in part by her and other Democrats. Or, that she and her husband – the second gentleman – would criss-cross the country to convince people to get jabbed.
But Biden has taken credit for not only the vaccines but the ensuing reopening of the economy, job creation and growth.
But now the push to vaccinate Americans appears to have stalled, falling short of Biden’s vow to get 70 percent of adults jabbed with at least one shot prior to July 4. The CDC reports that 66 percent of people over the age of 12 have been treated with at least one injection; 57 percent are fully vaccinated.
Many in the media are blaming Republicans for the sluggish uptake, suggesting that it is redneck know-nothings who are refusing the vaccine. A New York Times headline is typical: “Least Vaccinated U.S. Counties Have Something in Common: Trump Voters.”
As a piece in Salon pointed out, conspiracy theorists about vaccines abound on the left and the right, and include such notable liberals as Robert F. Kennedy Jr., Rizza Islam, Dr. Rashid Buttar and Louis Farrakhan, who warned Black people from taking the vaccine because of its “links to Bill Gates and governmental sterilization plans.”
After all, it has been reported that one-third of New York hospital workers are unvaccinated; in addition, about the same number of nursing home employees in the Empire State have refused the shot, despite the clear vulnerability of the population those workers serve. Call me crazy, but I don’t imagine most of those folks are Republicans.
Instead of berating Americans who have not been vaccinated, or beating up on Facebook, it would be wise for President Biden and the CDC to tell the American people why we are seeing a surge in COVID-19 despite considerable progress with the vaccine roll-out. After all, between the 57 percent of people who have taken both jabs and the 34 million who have had COVID-19, we should be approaching herd immunity.
It appears that the Delta variant is highly contagious but not as deadly as the prior iterations of the virus; it also appears that this strain can sometimes break through the protections provided by the vaccine. The shots, however, seem to prevent serious illness, which can lead to hospitalizations or deaths, and therefore are extremely valuable.
The Israeli prime minister has suggested that some vaccines work better than others against the Delta virus; Americans need to be told the truth about the efficacy of the various shots.
President Biden needs to get in front of the confusion sewn by the current surge in cases. His administration will suffer a huge political blow, and the economy will be shattered, if he allows officials to impose more lockdowns.
We need honest information from the White House – a White House that promised total transparency – and we need the CDC to explain why the vaccines are still worthwhile. Biden also needs to tell the Texas publicity hounds to go home to do their jobs.
Opinion