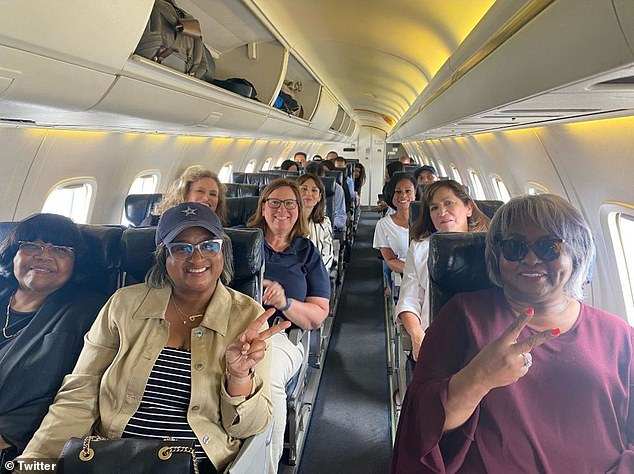 The trip to Washington, D.C., that Texas Democrats took to block the passage of a sweeping election reform bill is expected to cost around $1.5 million.
Texas state Rep. Armando Walle (D) told NBC News that the price of keeping the Democratic lawmakers out of Texas until Aug. 7, when the session ends, could be as high as $1.5 million.
He said the two private jets most of the lawmakers flew on to Washington cost more than $100,000. Fees for housing, food and other transportation are expected to make up the majority of the remaining expenses.
More than 50 Democratic lawmakers from the Texas state House fled to Washington last week to deny Republicans a quorum and prevent the passage of a sweeping elections reform bill.
The charter jets used to transport the House members from Texas to Washington were reportedly paid for by a wire transfer from the Texas House Democratic Caucus hours before the trip began, according to NBC News.
No taxpayer money, however, is being spent on the trip, caucus and staff members said, according to the network. The Texas House Democratic Caucus and other groups in the party, including the Mexican American Legislative Caucus, have put existing funds toward the trip so far.
Walle also said the members and caucus have been fundraising. The total number of funds received remains unknown, but he expects that it is at $250,000 so far.
Other groups have said they will help generate funds for the caucus, including former Rep. Beto O’Rourke’s voting rights group, Powered by People.
Some lawmakers and staffers have paid for costs on their personal credits cards, NBC News reported, citing legislators.
One lawmaker told the network that a large group of hotel rooms at a midrange hotel in D.C. was reserved on a House member’s personal American Express credit card. That member reportedly expects to be repaid for the transaction eventually.
Republicans, however, are arguing that taxpayer dollars are going toward the trip, since a special legislative session lasting a month is expected to cost more than $1 million, according to NBC News. With Democrats out of town for the period, no bills are expected to land on Texas Gov. Greg Abbott’s (R) desk for signature.
"There is no excuse for their PR stunt, and I join thousands of Texans in demanding that these Democrats get back to work," Abbott said, according to The Associated Press.
The legislation opposed by the Democrats includes provisions to limit the use of ballot drop boxes, impose new requirements for obtaining an absentee ballot, end straight-ticket voting and ban curbside voting except for individuals who are physically unable to enter a polling place or at risk of their health, among other initiatives.
Texas