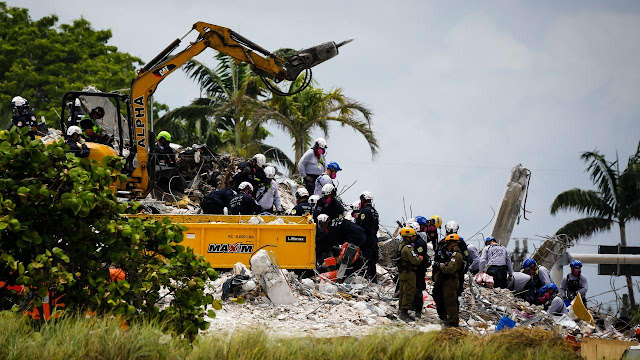 The death toll for the Surfside condominium collapse climbed to 36 on Tuesday with more than 100 people still missing.
Officials said eight more bodies have been discovered on Tuesday, the most in one day, with the total number of dead now at three dozen, the Associated Press reported.
It’s been nearly two weeks since the building collapsed with no one being found alive in the rubble since the first few hours after the collapse.
Miami-Dade Mayor Daniella Levine Cava said hope has been diminishing with the mission for workers ready to switch from finding those who are alive to recovering those who have died.
“Really, you will not see a difference,” Levine Cava said. “We will carefully search for bodies and belongings, and to catalog and respectfully deal with any remains that we find.”
Rescue efforts have been complicated the past two weeks from bad weather, pop up fires and concerns part of the building that remained standing would fall.
The rest of the building was torn down before Tropical Storm Elsa hit Florida with workers now able to expand their search.
The closest workers were to finding a survivor was after they heard the sound of a woman yell, but the yelling quickly ended and they were unable to get to her.
Children and adults are among the dead from the collapsed building, with one child being the daughter of a Miami firefighter.
National