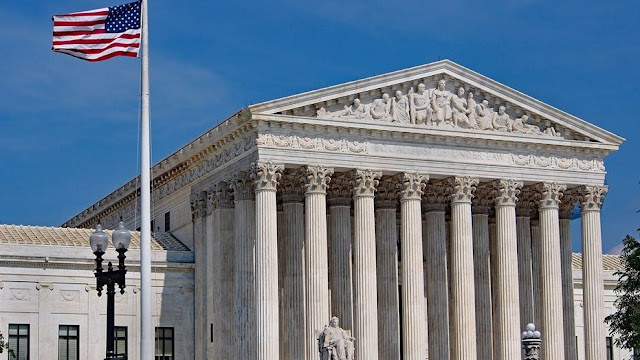 The Supreme Court’s recent donor disclosure ruling could embolden future challenges to campaign finance rules, experts say.
In Thursday’s 6-3 decision, split along ideological lines, justices struck down a California statute requiring charities to reveal their donors to state officials. The court’s conservative wing said the rule had a chilling effect on First Amendment rights.
The ruling doesn’t apply to publicly disclosed donors or political groups. But in the majority opinion, Chief Justice John Roberts wrote that disclosure laws must be “narrowly tailored” to important government interests.
Experts say Roberts’s opinion effectively toughens the standard of review for all laws that compel disclosure, including election rules. Justice Sonia Sotomayor wrote in her dissent that the ruling “marks reporting and disclosure requirements with a bull’s-eye.”
Tara Malloy, an attorney at the Campaign Legal Center, which backed California’s rule, told The Hill that the ruling could spark further challenges to campaign finance laws. Still, she noted the court has consistently affirmed that disclosure of political contributions and spending advances the government’s interest in preventing corruption.
“Even if the standard of review is slightly heightened, there’s no reason to think that election transparency laws can’t clear it,” Malloy said.
David Keating, president of the Institute for Free Speech, which filed its own lawsuit against California’s disclosure law, said the ruling could increase his organization’s challenges to “unreasonable” campaign finance rules.
“It definitely makes it easier for us to persuade courts that certain disclosure laws are unconstitutional,” Keating said. “With that said, laws that require disclosure of large campaign contributions to politicians, political parties, PACs … I don’t think they are in any danger from this ruling.”
Watchdog groups that advocate for stricter campaign finance rules, including the Campaign Legal Center, Common Cause and Citizens for Responsibility and Ethics in Washington, have insisted the ruling will not impact regulation of political groups.
“[T]his was not a campaign finance disclosure case, and campaign finance laws remain constitutional and vitally important despite the Court’s decision today,” Common Cause President Karen Hobert Flynn said in a statement Thursday.
Other campaign finance reform groups have expressed more concern. Meredith McGehee, executive director of Issue One, said the decision “threatens the future of robust disclosure regimes.”
“We hope that in the aftermath of this decision, the Court does not apply this reasoning to disclosure associated with politically active groups,” McGehee said in a statement.
Rick Hasen, a professor at the University of California, Irvine, and an expert in campaign finance law, wrote in a New York Times op-ed that the ruling “calls into question a number of campaign finance disclosure laws” and even limits on the amount of money donors can give to political candidates.
“Lower courts can now find that such laws are not narrowly tailored to prevent corruption or its appearance or do not provide voters with valuable information — two interests the court recognized in the past to justify campaign laws,” Hasen wrote.
Democratic lawmakers said the ruling signaled that the high court would not uphold laws to crack down on “dark money,” undisclosed political spending on ads and other messages that surpassed $1 billion in the 2020 election.
“We are now on a clear path to enshrining a constitutional right to anonymous spending in our democracy, and securing an upper hand for dark-money influence in perpetuity,” Sen. Sheldon Whitehouse (D-R.I.) said in a statement Thursday.
Democrats argue that the public cannot hold politicians accountable without knowing the identity of individuals or corporations bankrolling their campaigns. Republicans say measures to unmask secret donors discourage individuals from making donations for fear of harassment, effectively chilling their free speech rights.
A sweeping election overhaul bill, passed by the House before being blocked by Senate Republicans, would require any group that spends $10,000 or more to influence elections to disclose its donors. Those include politically active 501(c)(4) nonprofits, which are currently permitted to keep their funding sources hidden.
Keating said the legislation, known as the For the People Act, would be met with increased scrutiny from federal courts if implemented.
“I think even before this decision, it would have been vulnerable,” Keating said, referring to the bill. “With the decision, it’s even more vulnerable.”
Some campaign finance reform advocates have pointed to what they see as positives in Thursday’s ruling. Malloy noted that Justice Clarence Thomas was the only justice to suggest that the court should have extended its review to all disclosure rules.
“Even [Samuel] Alito and [Neil] Gorcush did not seem to have much interest in reconsidering electoral disclosure laws in terms of the standard of scrutiny,” Malloy said.
She added that the plaintiffs in the case, conservative nonprofits Americans for Prosperity Foundation and the Thomas More Law Center, specifically stated that they were not challenging campaign finance rules.
The lawsuit was backed by a diverse group of organizations, including the American Civil Liberties Union, that urged justices to keep the ruling specific to the case, even as some political groups filed briefs in the case pushing the court to dismantle election-related disclosure laws.
The Supreme Court has frequently affirmed support for campaign finance disclosure. In its 2010 Citizens United ruling that struck down a ban on corporate political spending, justices voted 8-1 to uphold disclosure laws. Thomas was the lone dissenter.
In 2017, the Supreme Court affirmed rules mandating that groups running candidate-focused ads shortly before an election must disclose their donors and details about their spending. The court has consistently declined to take up challenges to campaign finance disclosure laws.
National