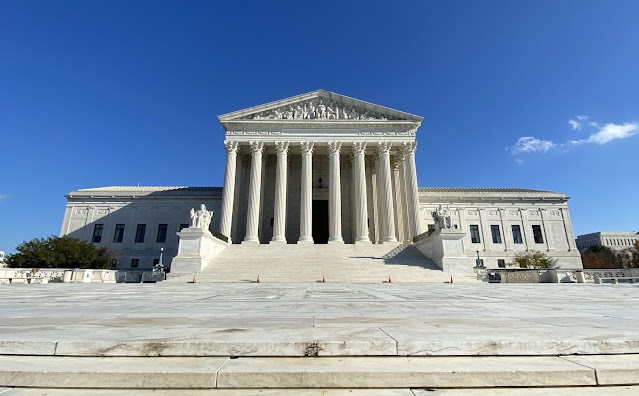 The Supreme Court on Thursday ruled that a pair of Republican-backed Arizona voting restrictions do not run afoul of federal law, rejecting a Democratic challenge and dealing a blow to voting rights advocates.
The 6-3 decision, which fell along familiar ideological lines, comes as a raft of GOP-crafted voting limits are introduced and passed across the country, with Democrats and civil rights groups turning to courts to argue the new measures threaten to suppress the vote of racial minorities.
One Arizona policy at issue in Thursday’s case requires provisional ballots cast in the wrong precinct to be discarded. The second measure makes it illegal for most third parties to deliver ballots for others, a practice critics refer to as “ballot harvesting.”
Writing for the majority, Justice Samuel Alito said a lower court erred by ruling that those restrictions violated Section 2 the Voting Rights Act of 1965, which bars racially discriminatory voting policies.
The court’s three liberals responded with a blistering 41-page dissent that accused the conservative majority of continuing a trend of undermining federal voting protections.
“What is tragic here is that the Court has (yet again) rewritten — in order to weaken — a statute that stands as a monument to America’s greatness, and protects against its basest impulses,” wrote Justice Elena Kagan. “What is tragic is that the Court has damaged a statute designed to bring about ‘the end of discrimination in voting.’ ”
President Biden in a statement said he was “deeply disappointed” by the Supreme Court’s ruling.
"In a span of just eight years, the Court has now done severe damage to two of the most important provisions of the Voting Rights Act of 1965 – a law that took years of struggle and strife to secure," Biden said.
Thursday’s ruling comes eight years after the Shelby County v. Holder decision, which dealt with another provision of the Voting Rights Act. There, the court eliminated the government’s preclearance authority under Section 5 of the law, which had allowed the Department of Justice to screen proposed changes to voting procedures in states with a history of racial discrimination in elections.
In striking down the preclearance requirement in 2013, Chief Justice John Roberts, writing for a 5-4 majority, said the Voting Rights Act could continue to guard against racially discriminatory voting laws after the fact through Section 2 of the law, the provision at issue in Thursday’s case.
But according to election law expert Rick Hasen, Thursday’s decision amounted to a “significant weakening of Section 2.”
“The conservative Supreme Court has taken away all the major available tools for going after voting restrictions,” said Hasen, referring to Thursday’s ruling and past decisions including Shelby County. “This at a time when some Republican states are passing new restrictive voting laws.”
The challenge to Arizona's voting restrictions marked the first time the Supreme Court addressed a vote-denial lawsuit brought under Section 2, which bars discrimination on the basis of race, color or membership in a language minority group. Proving a violation requires showing either that lawmakers intended discrimination, or that a voting restriction has a discriminatory impact.
Although the majority opinion was not a “death blow” to Section 2, it seriously reduces its effectiveness “as a tool to fight against laws that make it harder to register and vote,” Hasen said.
“Rather than focus on disparate impact — whether a law leads to minority voters registering or voting in lower numbers — the court applies a much broader totality of the circumstances test with a huge thumb on the scale favoring the state and its restrictive law,” Hasen, a law professor at the University of California, Irvine, wrote on the Election Law Blog.
The lawsuit was brought by the Democratic National Committee and backed by Arizona Secretary of State Katie Hobbs (D). Defending the voting restrictions were the state’s Republican Attorney General Mark Brnovich and the Arizona Republican Party.
“Today is a win for election integrity safeguards in Arizona and across the country,” said Brnovich, who argued the case in March before the justices. “Fair elections are the cornerstone of our republic, and they start with rational laws that protect both the right to vote and the accuracy of the results.”
Thursday’s decision reverses a federal appeals court in San Francisco that last year found the Arizona policies violated Section 2 of the Voting Rights Act of 1965 because they disproportionately affect minority groups.
In a divided ruling in favor of the Democratic challengers, the Ninth Circuit Court of Appeals found that both of the Arizona restrictions discriminated against people of color — and went so far as to conclude that its ballot-collection restriction was intentionally discriminatory.
The blistering decision took Arizona to task for its historic practice of burdening the franchise of nonwhite voters.
“For over a century, Arizona has repeatedly targeted its American Indian, Hispanic, and African American citizens, limiting or eliminating their ability to vote and to participate in the political process,” the appeals court wrote.
But writing for the majority on Thursday, Alito said the Ninth Circuit had “misunderstood and misapplied” Section 2 of the Voting Rights Act, and exceeded its authority when it overruled a district court’s determination that there was no racially discriminatory intent behind Arizona's ballot-collection restriction.
National