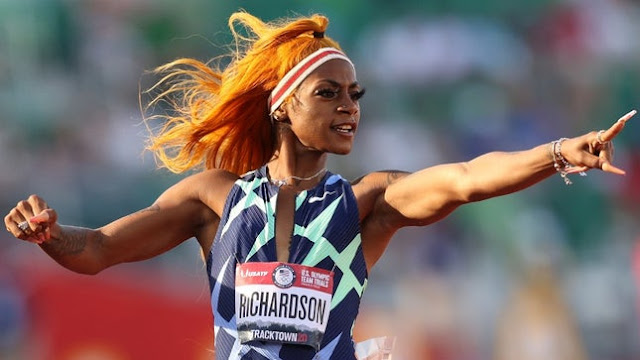 The suspension over a positive marijuana test of United States star sprinter Sha’Carri Richardson, who was set to represent the country in the 100-meter dash in the upcoming Tokyo Olympics, has prompted a wave of sharp criticism over how the drug is viewed.
Richardson’s positive test for marijuana was formally announced by the U.S. Anti-Doping Agency (USADA) on Friday, though news of the test result surfaced on Thursday. The agency said that Richardson accepted a one-month suspension that began on June 28.
The suspension automatically invalidates her blistering 100-meter time of 10.86 seconds that Richardson ran to win the event at the U.S. Track and Field Olympic Trials in Oregon last month.
If selected to the national team, Richardson would be eligible to compete in the 4x100 relay, which doesn’t happen until later in the two-week world tournament set to begin July 23.
Richardson explained the reason behind her positive test on the "Today" show Friday morning, telling Savannah Guthrie that she had smoked weed as a coping mechanism following the death of her mother.
“It sent me into a state of emotional panic,” Richardson said, saying that she had learned of her mother’s death from a reporter during an interview. “I didn’t know how to control my emotions or deal with my emotions during that time.”
She added: “I greatly apologize if I let you guys down, and I did.”
Travis Tygart, CEO of USADA, described her suspension as “heartbreaking,” but said that the rules on the matter were “clear.”
The World Anti-Doping Agency (WADA) prohibits marijuana use during competitions — defined as between the end of day before competition and an event’s conclusion. Anything over 150 nanograms per milliliter of THC, the psychoactive component found in weed, will trigger a positive test.
A 2011 study by WADA states: “Based on current animal and human studies as well as on interviews with athletes and information from the field, cannabis can be performance enhancing for some athletes and sports disciplines.”
Richardson, however, has received a groundswell of support from other athletes, public figures and even politicians, while her situation has garnered equal levels of outrage.
“This is bull Shxt……tbh,” Cleveland Browns star receiver Odell Beckham Jr. tweeted late Thursday night.
In the past two years, America’s most prominent professional sports leagues, including MLB, the NFL and NBA, have relaxed penalties surrounding positive marijuana tests.
MLB no longer tests for weed unless a player is in a treatment program, while the NFL axed suspensions for players who test positive for the drug. NBA players are randomly tested for weed four times during the season, but don’t face suspension until their third positive test.
The paradigm shift on marijuana in professional sports mirrors the drug’s growing public approval around the country.
A growing number of states have approved legal marijuana use on some level; 18 states and Washington, D.C., allow recreational use, while 16 other states allow weed for medicinal purposes.
“There is no need for Sha’Carri to apologize,” progressive Rep. Jamaal Bowman (D-N.Y.) tweeted Friday.
“We need to get rid of archaic rules for a substance that is fully legal in 19 states plus DC. And we need to legalize it at the federal level.”
National