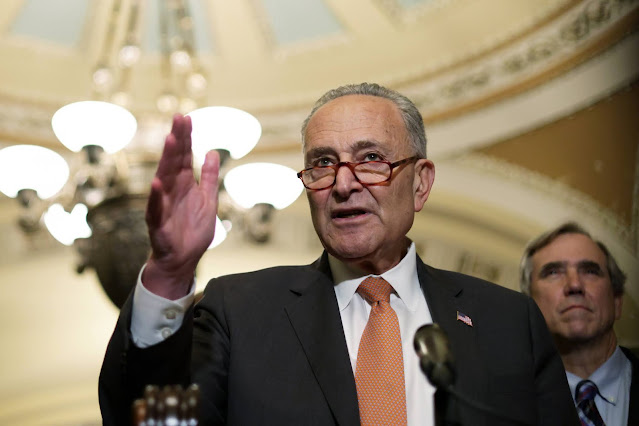 Senate Majority Leader Charles Schumer (D-N.Y.) moved on Monday to tee up a key test vote for a bipartisan infrastructure bill despite GOP warnings that they'll block the upper chamber from moving forward.
Schumer's maneuvering sets up the test vote for Wednesday. He'll need 60 votes, including the support of at least 10 Republicans, in order to advance a shell bill, into which senators would swap the text of the bipartisan deal once it is finished.
"That vote on cloture will take place on Wednesday," Schumer said from the Senate floor. "What we're talking about this week is a vote on whether or not to proceed to debate."
The Wednesday vote would be the first step toward taking up and debating the bipartisan infrastructure package. Schumer on Monday night stressed that senators were just agreeing to start debate if they vote "yes" on Wednesday and that it was not a hard deadline for the bipartisan group to wrap up its work.
"It is not a deadline to determine every final detail of the bill," he said, adding that the five core Democratic negotiators — Sens. Kyrsten Sinema (Ariz.), Mark Warner (Va.), Joe Manchin (W.Va.), Jon Tester (Mont.) and Jeanne Shaheen (N.H.) — are on board with his strategy.
"What Chuck's done is no different than what we do on every bill," Tester told reporters on Monday.
If he is able to get over Wednesday's initial hurdle, Schumer is planning to make the bipartisan group's plan the first amendment to the shell bill if their agreement is finalized on Thursday. If the bipartisan group isn't ready, he said he would instead swap in smaller pieces including committee-approved highway and water infrastructure bills as the first amendment.
But Republicans have said that without a deal on the bipartisan package, Schumer will fall short of being able to get the 60 votes needed to advance the shell bill.
Sen. John Thune (S.D.), the No. 2 Senate Republican, warned that without the bipartisan group being finished by Wednesday, Schumer "is not going to get 60. Let's put it that way."
Senate GOP Leader Mitch McConnell (Ky.) warned on Monday that Republicans "need to see the bill" before the vote on whether or not to start debate.
"I think that’s pretty easily understood," he added.
The bipartisan group is still trying to finalize its legislation after announcing with President Biden at the White House late last month that it had a deal on a framework for $1.2 trillion in spending over eight years. Several GOP members have warned Schumer against moving forward with the Wednesday vote because they won't be ready with their bill by then.
Sen. Rob Portman (R-Ohio), who has led the talks with Democrats, called forcing a vote without legislation finalized "absurd." Portman estimated that they had roughly a dozen things left to be figured out.
"People need to know what's in it. That's only fair, right," Portman said.
Sen. Lisa Murkowski (R-Alaska) declined to say how she would vote on Wednesday but urged Schumer to give the group space to work out the remaining hurdles.
"I don't want us to lose the momentum and just the energy that we've built. ... If what we're trying to do is to succeed, and I would like to think that Sen. Schumer would actually like this to succeed, then he will allow us that time to make sure that the language is right, that people have an opportunity to actually look at what they might be moving on," Murkowski said.
The bipartisan group missed their self-imposed deadline to have all their issues worked out by last Thursday as how to pay for their bill remained as a sticking point. After conservatives pushed back over roughly $40 billion in funding for the IRS, which would have generated up to $100 billion in revenue, negotiators agreed to drop that from their bill.
They are expected to talk by Monday night on Zoom but they are still trying to work out what to replace it with. Portman warned they would not be able to meet Schumer's Wednesday deadline. Even after they've finalized the text they will still need to get an official analysis from the Congressional Budget Office.
Democrats are under fierce pressure to meet their pledge to advance Biden's sweeping infrastructure plan before they leave for the August recess.
Schumer has vowed that he will hold a vote on both the bipartisan infrastructure deal and a budget resolution that will tee up a second, $3.5 trillion party-line spending package before the Senate leaves town.
The Senate is scheduled to start a weeks-long summer break on Aug. 9, but Schumer has warned that the could hold them in Washington, D.C., longer to finish up their work.
"They have been working on a bipartisan framework for more than a month already and it's time to begin the debate," he said.
"We must make significant progress on both the bipartisan infrastructure bill and the budget resolution by the end of the work period. There is no reason we can't get the ball rolling this week on both elements of the Senate's infrastructure agenda," he added.
National